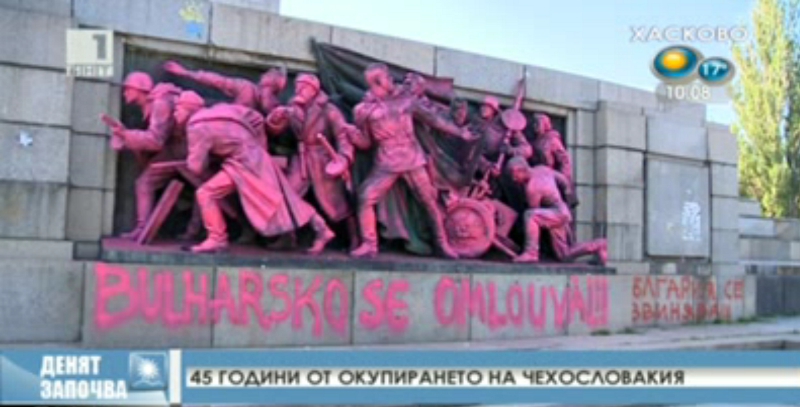 A metal bas-relief, part of the Soviet Army monument in Bulgarian capital city Sofia, has been painted pink overnight, with an inscription underneath apologising for Bulgaria’s part in the invasion that ended the Prague Spring in 1968.

August 21 marks the 45th anniversary of the invasion by troops from the Soviet Union and other communist bloc countries – Romania being the sole exception – that ended the period of unprecedented political liberalisation in Czechoslovakia.

The inscription under the painted bas-relief reads “Bulharsko se omlouvá” (Bulgaria is apologising). The colour choice was not picked at random either, with Czech artist David Černý repeatedly painting the monument to Soviet tank crews in Prague pink, Bulgarian media noted.

The Soviet Army monument has been a lightning rod for controversy in recent years, with several civil groups demanding that it is moved from its current place in central Sofia to the city’s museum of communism, opened in 2011. Such demands are opposed by Russophile groups in Bulgaria, who say that it represents Bulgaria’s liberation from the fascist regime and any attempt to move it was tantamount to historical revisionism.