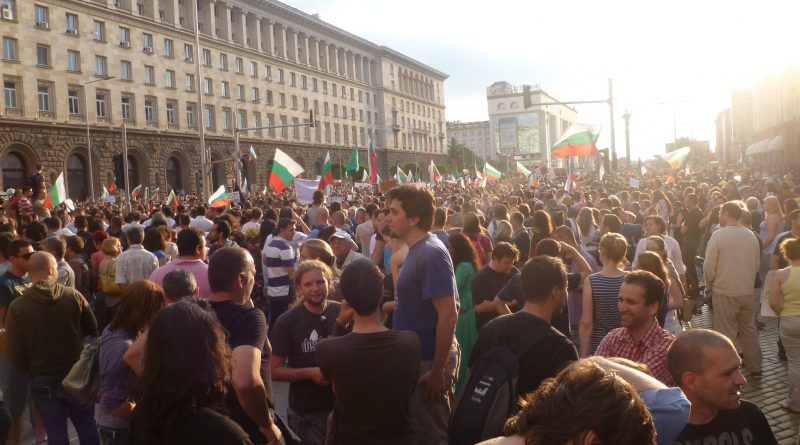 The anti-government protests in Sofia on the evening of June 22 gathered what reporters saw as a new record number of participants and came to a close with groups of young people standing under what the following night would be the Super Moon, and the next night of protests, to discuss: what next?

It was a heady day indeed, that saw temperature records set for the day in Sofia and Plovdiv, the heat hardly deterring those who turned out to show their determined rejection of what may fairly be described as a government discredited from the outset.

In the Bulgarian capital, the day began with a few hundred protesters gathered outside the gargantuan lump that is the National Palace of Culture, to convey to the Party of European Socialists bigwigs meeting there their disdain for Bulgarian Socialist Party and PES leader Sergei Stanishev and the man that, in collusion with the Movement for Rights and Freedoms, has been employed as prime minister, Plamen Oresharski.

For the sake of their foreign audience, the crowd held placards in English and German, summing up the messages of the past nine days of protests and challenging the PES delegates to join in their rejection of Stanishev.

A somewhat futile exercise, of course, as PES boasts of those European capitals where its leaders and member parties hold sway. Stanishev trotted out to his audience, in a lengthy address in English, his portrayal of the “repression” of the Boiko Borissov years and the reward for patience that was the BSP “victory” in the May 2013 elections.

Stanishev, in turn, won an endorsement from the PES that he leads, but, if it is true that he may nursed ambitions of seeking the post of European Commission President after the European Parliament elections in May 2014, these officially evaporated – current EP President Martin Schultz was named as PES’s candidate to take over from Jose Barroso. 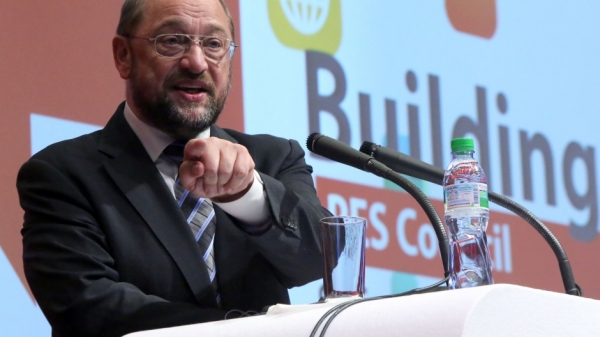 Whether this was a consequence of the arrogance, political clumsiness and misjudgments of the BSP government will remain known only to those who made the deals within the inner circles of the PES.

Stanishev, for now, has no future as a candidate for the EC President’s post. That may not be the most profound of his problems. Going by the only recent poll on the topic, and the massive spontaneous support for the anti-government protests, his so-called “expert” cabinet lurches somewhere between being the butt of bitter jokes and outright contempt among many, even arguably most, Bulgarians.

The anti-government push is strongest in Sofia, traditionally and logically the most political town, but even in the less taut atmosphere of Plovdiv, Bulgaria’s second city, a petition for the resignation of the government and the appointed regional governor from the MRF, Ventsislav Kaymakanov, had gathered about 1500 signatures at its single table in less than 24 hours.

Make no mistake, Borissov may have the largest single share of seats in Parliament but that same poll shows anything but dividends for him from the protests. Stanishev has acknowledged that the resignation of the BSP government would lead to fresh elections and a return to power of Borissov, but no one should interpret that as a nation turning again to Borissov as a saviour.

Going by that poll, only the head of state, President Rossen Plevneliev, has steered a course that has yielded a gain in popularity (read: credibility, or perhaps even respect) for him.

Borissov’s party is largely boycotting Parliament, making the sittings of the legislature a slightly absurd spectacle. Friday’s Question Time was a case in point. The presiding officers’ bench is a largely empty one, given that GERB did not take up the chance to have a Deputy Speaker. Hardly unusually for Bulgaria’s legislature, the eve of the weekend does not attract all MPs, so after the quorum was established, proceedings largely consisted of a scattering of socialist and MRF MPs, with ministers answering questions while a BSP functionary presided over the sitting.

But Borissov has been erratic about the boycott, which has changed its functioning over the weeks. Currently, the idea is that MPs from Borissov’s GERB would participate only in sittings to debate reforms to electoral law. On June 22, Borissov said that GERB could return, if Stanishev apologise for various political sins, including not letting the largest party have the Speaker’s chair, the lion’s share of committee chairpersonships, and due acknowledgement that it is indeed the largest single party. This apology scenario is hardly likely one to come to pass, but Borissov’s messages about the conditions for lifting the boycott came across more as driven by emotion than by political principle.

Political principles are, of course, mutable things. PES, after all, effectively expressed backing for a government that is largely in thrall to one of Europe’s most venomous ultra-nationalist parties, in the form of Volen Siderov’s Ataka. The extent to which Ataka is dictating policy is a matter of debate, but the government’s firmness in halting the privatisation of the freight services of state railways BDZ is right in line with Ataka’s stance against privatisations, and hardly seems a coincidence.

And so, against a background of this messy political business, the protesters again trod their pilgrimage through the streets of the Bulgarian capital city, shouting the now-familiar slogans, keeping the peace, spurning any and all provocations to conflict, cheerfully posting protest photographs – of favourite posters and of themselves, and their children with them – on Facebook, the crucible of the protest.

However, no matter the extent that reason may dictate that a government should depart when it clearly enjoys no significant amount of confidence, when its plans continually fail to be underpinned by detail on how to fulfil them, when all it offers as arguments to remain in power are scary bedtime stories about risks of losses of EU funds and power cuts, this government appears firm about grasping on to power.

The beginning of the weekend on June 21 also brought the official beginning of summer, and for many observers it is an open question whether the protesters can maintain momentum. Maintaining momentum was a problem even for the more carefully organised in advance, regimented and choreographed protests of early 2013. Then, the denouement came relatively swiftly, when Borissov resigned, and people did not need to endure the cold for too long a time. In the case of these protests, the BSP-MRF government may be counting on the peak of the summer holiday period melting away the turnout for the protests. However Machiavellian, that is not an invalid strategy, especially if continued – and more sophisticated – deal-making among the BSP, MRF and Ataka can keep the government in power.

On the other hand, at least two factors bear the seeds of political destruction for this government. One is that, if it has already blundered seriously more than once, it can and will do so again. At best, it is highly doubtful that its band-aid remedies – adding some leva to parental benefits, tinkering here and there – will meet not only the expectations but the serious needs of Bulgarians.

For the time being, the protests will continue, peacefully, perhaps with some new slogans, certainly with the same chants (“resign!”; “Mafia!”; “Red rubbish!”), the same wry jokes about lumpen, the same appreciation for the newest witty poster. It can be no wonder that so many are asking the question of each other: What comes next?