Eight people, reportedly including a member of the Gendarmerie, were injured outside the Sofia headquarters of Volen Siderov’s Ataka party as bottles and stones were thrown at a group of anti-government protesters on the night of June 17.

The tense situation continued past midnight, with large contingents of police keeping apart the protesters from the supporters of Bulgaria’s ultra-nationalist party, which the protesters see as culpable in the debacle surrounding the current Bulgarian Socialist Party government, which stays in place with the support of the Movement for Rights and Freedoms.

The protesters who went to Ataka headquarters were a group that apparently had come from the fourth consecutive night of demonstrations that attracted several thousand people to demand that the Plamen Oresharski administration step down.

Earlier, Siderov had illegally blocked off the street near his headquarters, addressing a crowd from behind a throng of his beefier supporters. The Interior Ministry confirmed to the media that the blocking off of the street had been illegal and said that it was investigating.

Later, the situation was aggravated as obscenities and objects were hurled. Those reportedly injured included an Ataka MP, Kristian Dimitrov.

Protesters, who blame Ataka for its vote that provided the quorum in Parliament that made the BSP government possible three weeks ago, shouted at the Ataka group that they were “Janissaries”, a reference to the force that was made up partly from Bulgarians under Ottoman rule. At the earlier mainstream part of the protest in central Sofia, outside the Cabinet office and Parliament, some protesters carried posters mocked-up to show Siderov wearing a fez.

Interior Minister Tsvetlin Yovchev told local media that police were seeking to stabilise the situation and to keep it from worsening.

Speaking to journalists, while his head was sheltered by boards held by supporters to keep any flying objects from falling on it, Siderov pointed to the “aggression” of the protesters.

It was not the first time that Ataka’s headquarters have been the focus of protest since the BSP government, which includes MRF members, came into office. Soon after the administration was sworn in on May 29, a protest marched on Ataka headquarters, hurling abuse and objects at the building, prompting Siderov to hit out at authorities for failing to protect the building of his party.

Siderov has alleged that centre-right former ruling party GERB is behind the nationwide protests, seeking to destabilise the country,  a charge that GERB rejects. Siderov said that GERB and “organised crime groups” allied to Boiko Borissov’s party were seeking to provoke civil war in Bulgaria.

As events unfolded on the night of June 17, Siderov addressed the crowd, his words applauded by supporters and jeered by protesters.

A few days ago, amid the protests – organised in social networks and which with this exception have passed peacefully, with no clashes – warnings were issued online that agents provocateur would seek to engender an incident at Ataka headquarters. 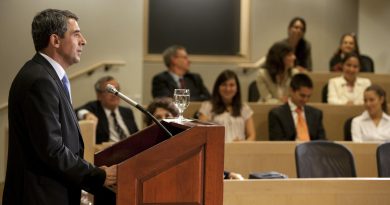