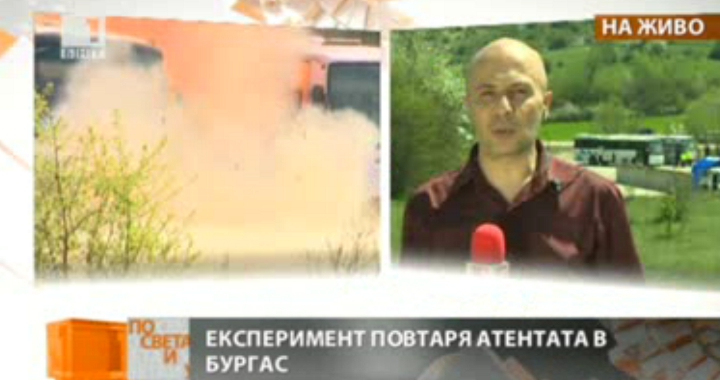 Bulgarian investigators detonated an explosive device on April 26 in an attempt to reconstruct the crime scene of the terrorist attack at Bourgas Airport in July 2012.

Five Israeli tourists, a Bulgarian bus driver and the carrier of the bomb died in the blast, which also left 30 people injured in the parking lot of the airport on July 18 2012. In February, Bulgaria officially linked the perpetrators of the attack to the military wing of Hezbollah.

The head of Bulgaria’s National Investigative Service, Boiko Naidenov, told reporters that the reconstruction was successful and confirmed the evidence collected so far, resulting in a crime scene that was nearly identical to the one at the site of the Bourgas bombing.

The investigators used a dummy to stand in for the suicide bomber, which showed the same damage as the bomber’s body after the attack, Bulgarian National Television reported.

Naidenov declined to give further details. “Do not expect disclosure of details of the investigation […] before we are finished and have filed an official indictment in court,” he said.

Bulgaria had little experience with this kind of investigation and used the experience of law enforcement agencies from partner countries, Naidenov said. According to news website Mediapool.bg, Europol investigators were part of the crime scene reconstruction, with the European police agency also funding the exercise.

Bulgarian officials have said that they believe that two more people were involved in planning and carrying out the attack – they were identified as holders of Canadian and Australian passports and lived on the territory of Lebanon between 2006 and 2010.

The two co-conspirators used their real identities to enter Bulgaria, as did the suicide bomber, and again to exit the country. While in Bulgaria, they used fake US drivers’ licenses made in Lebanon.

Investigators had managed to track the co-conspirators’ movements in Bulgaria for the entire duration of their stay, between June 28 and July 18. The trio used the fake drivers licences, which looked like those issued by the state of Michigan, to check into hotels and rent cars.