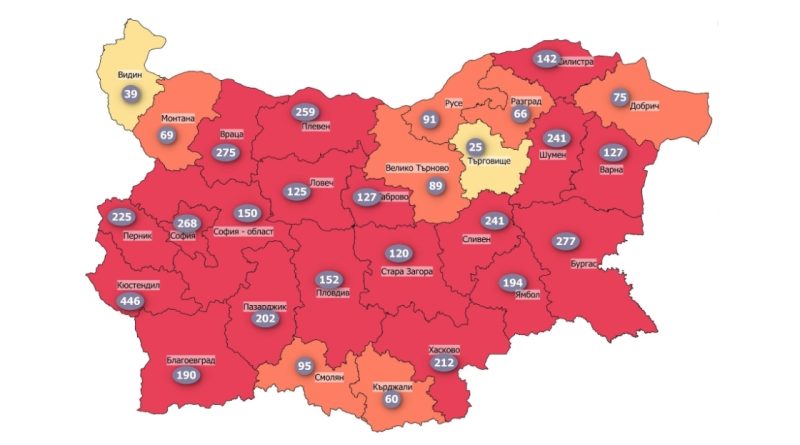 Nineteen out of Bulgaria’s 28 districts are currently classified as Covid-19 “red zones”, meaning an incidence of more than 200 cases per 100 000 population on a 14-day basis, according to an update posted on February 23 by the National Centre for Infectious and Parasitic Diseases.

This is an increase from a week ago, February 16, when half of Bulgaria’s districts – 14 – were “red zones”.

The district of Kyustendil has the highest incidence, 446 out of 100 000 population.

Kyustendil municipality has extended additional restrictive measures against the spread of the disease until March 7, including mandatory wearing of protective masks in outdoor public places and a strict admission system for the polyclinic in the city.

Thirteen vaccination points have been opened in Kyustendil. As of February 22, a total of 846 people have received a dose of the BioNTech-Pfizer vaccine, 520 the AstraZeneca vaccine and 21 the Moderna vaccine.

In the city of Sofia, the incidence is 268 out of 100 000 population, according to the National Centre for Infectious and Parasitic Diseases.

Seven districts are classified as “orange zones”, meaning an incidence of 60 to 119.9 per 100 000 population: Veliko Turnovo, Dobrich, Kurdzhali, Montana, Razgrad, Rousse and Smolyan.

Two are “yellow zones”, meaning an incidence to 20 to 59.9 per 100 000 population: Vidin and Turgovishte. No district in Bulgaria currently is classified as a “green zone”.