Bulgaria’s unicameral Parliament, the National Assembly, voted unanimously and without debate on March 8 2013 to adopt a declaration marking the 70th anniversary of the prevention of the deportation of Bulgarian Jews to Nazi Holocaust death camps.

While six million Jews were murdered in World War 2 concentration camps under the Hitler regime, in Bulgaria action by civil society, church and political leaders blocked the deportation, even though in the war Sofia was allied to Berlin.

After the vote, Speaker Tsetska Tsacheva said that Parliament had adopted an “historic document”.

The declaration said that the distance of history made it possible to evaluate events in Bulgarian history in their completeness and versatility.

Only such an approach could prevent speculation and misrepresentation of Bulgaria’s history.

An objective assessment of historical events meant that it could not be disputed that 11 343 Jews were deported from Northern Greece and the Kingdom of Yugoslavia, territories then under German jurisdiction.

“As we condemn this criminal act undertaken by the Hitlerite command, we regret that it was not in the power of the local Bulgarian administration to stop it.”

However, there had been attempts, such as the proposal submitted at the time by MP Petko Staynov to change the law on Bulgarian citizenship to give the Jews in those territories automatic citizenship, which would have saved them from the genocide.

The declaration noted that Bulgarian diplomats issued transit visas to Palestine to Jews from European countries who were not Bulgarian citizens, thus saving several thousand people.

“We strongly condemn all acts of xenophobia, anti-Semitism, religious and ethnic intolerance and join the global resistance to it. Bulgarian society, especially the younger generation, are entitled to be proud of the rescue of Bulgarian Jews. It is a message for modern society of tolerance, goodwill and humanity between people of different ethnicity, religion and culture,” the declaration said. 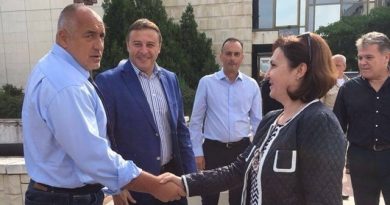