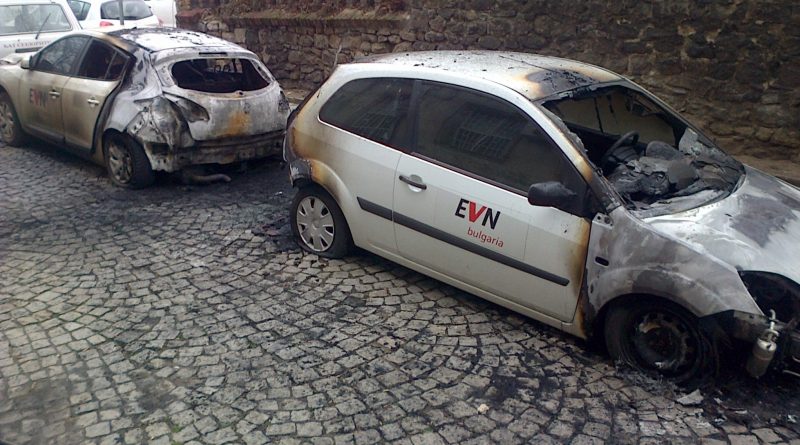 Arson is suspected after a car owned by energy distribution company EVN was burnt out on February 18 2013 in Plovdiv, police in Bulgaria’s second city said.

The fire destroyed the car’s engine and windscreen. On February 9, two EVN company cars were burnt out next to the company’s Plovdiv headquarters on the eve of a scheduled nationwide protest.

In Varna, three people were taken into custody by police as suspects in the breaking of windows at power distribution company Energo Pro’s headquarters in the Black Sea city on February 17. Police said that the three suspects were identified on the basis of video recordings and eyewitness statements. Investigations were continuing with the aim of identifying other people involved in the incident.

Meanwhile, the National Revenue Agency has begun inspections of the three energy distribution companies in Bulgaria, it was announced on February 18. The inspection of the three firms and companies related to them is intended to establish how the companies deal with the costs for external services, agency chief Krassimir Stefanov said.

He said that an audit report by the Public Financial Inspection Agency on the activities of the three energy distribution companies had been handed over on February 18 by Economy, Energy and Tourism Minister Delyan Dobrev.

In a February 18 statement, EVN Bulgaria chief Joerg Sollfelner rejected as utterly untrue various claims in a report in a Bulgarian-language daily regarding, among other things, that he supposedly drove a luxurious Bentley and led a lavish lifestyle fuelled by a huge salary. He said that he drove a Renault Laguna, travelled economy class, lived in an apartment of 88.5 sq m and dismissed the assertion that he was paid a monthly salary of 70 000 leva (about 35 000 euro) as a “gross lie”. Not only in Bulgaria but throughout EVN no manager was paid a salary on that scale, he said. Sollfelner expressed concern that neither he nor the company had been contacted for comment before the story was published.

As The Sofia Globe reported earlier, the series of protests against electricity companies and high bills that brought a reported 100 000 people on to the streets of 35 cities and towns in Bulgaria this past weekend were scheduled to continue on February 18 2013.

(Archive photo of the cars torched in Plovdiv on February 9: EVN)