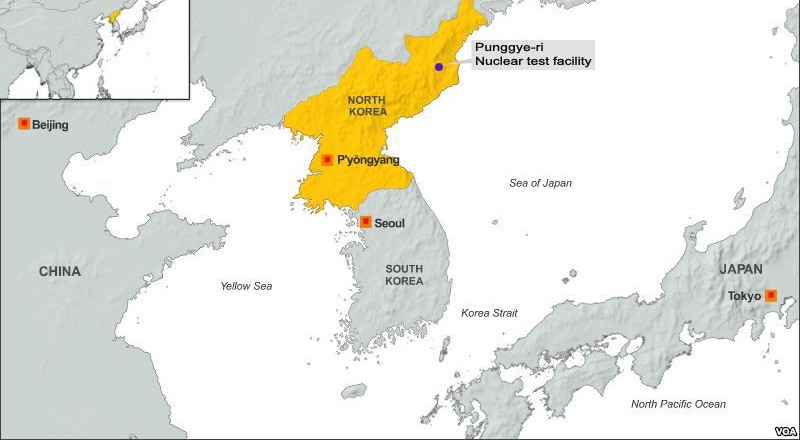 North Korea says it has “successfully” carried out a third nuclear test, in defiance of U.N. warnings to stop developing its atomic weapons program.

The official Korean Central News Agency said Tuesday the underground test used a “lighter, miniaturized nuclear bomb” with greater explosive force than previous tests. It said the test was in response to what it called the “reckless hostility” of the United States.

South Korea’s Defense Ministry, which has raised its military alert level, also confirmed that an atomic device was exploded Tuesday near the site of Pyongyang’s previous tests.

“There’s also concern that North Korea, at the same time that it was doing this nuclear test, or on the same day, might also launch some medium-range missiles, (but) we’ve had no confirmation of any such activity so far,” he said. “This is being taken very seriously by North Korea’s neighbors, especially South Korea and Japan.”

North Korea had threatened to carry out its third nuclear test in retaliation for United Nations sanctions that were expanded last month in response to a recent long-range rocket launch.

Initial reports suggested that North Korea’s latest nuclear test was stronger than its previous tests in 2006 and 2009. A North Korea Defense Ministry spokesperson said the explosion generated 6-7 kilotons of nuclear energy. But South Korean officials are still investigating whether the latest test used plutonium, as in previous tests, or uranium.

North Korea is believed to have enough plutonium to make several weapons. In 2009, Pyongyang announced it also would begin enriching uranium, giving it a second way to make fuel for nuclear weapons.

Since then, there had been much speculation about the timing of the possible test. South Korean officials told various media outlets that North Korea informed the U.S. and China of the impending test.

The Comprehensive Nuclear Test Ban Treaty, an international monitoring group, says the test “would constitute a a clear threat to international peace and security.”