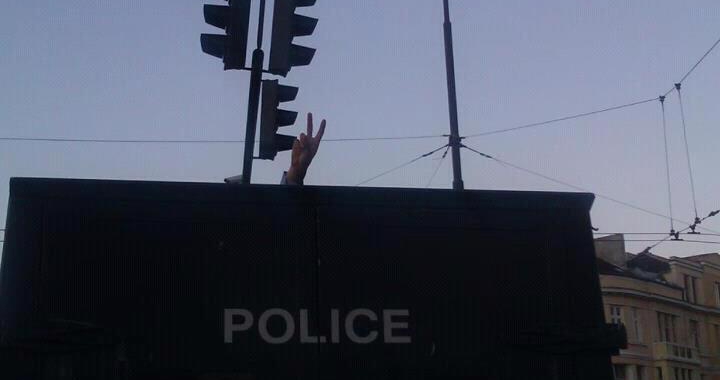 Ever since flashmobs came into fashion, Sofia has not lagged behind in staging them.

On June 13, more than 1000 people gathered at the key Orlov Most intersection in the heart of Sofia to protest against the new Forestry Act amendments, which MPs had approved earlier in the day. It started as a peaceful protest, but ended with at least 12 people arrested and a further 1000 disgruntled citizens.

The event continued for more than an hour and had been announced as a flashmob on Facebook. Although wildly successful, when the flashmob started gathering, the police were already performing their ladies-in-waiting role. It took the protesters by surprise, because nobody would have ever guessed there is a chunk of the state budget allocated for social media browsing. Nobody even expected they had internet access at their precincts.

The event was organised online and was actually meant as a birthday ‘gift’ of sorts for Prime Minister Boiko Borissov. The organisers claimed that Borisov’s minions voted in favour of the amendments, because they wanted to make him happy and boost his re-election campaign.

The police tried to disperse the protesters with mounted police, with officers on motorbikes and several other tricks, but the big junction remained occupied by the protesters for well more than an hour, thus blocking the rush hour traffic. Some people sat on the ground to show their protest was peaceful and gave flowers to police officers, but that did not help. Chanting and singing were an intrinsic part, but that also did not help, although it did distinguish this protest from the many others before it.

Some people got kicked, other got clobbered, but this time both sides managed to keep it almost orderly and without superfluous violence. I scored a police elbow on my chin while trying to get a close-up photo of the arrestees, so it was a proper protest.

The new amendments to the Forestry Act allow for the construction of ski resorts and hotels on land that will remain listed as forest, but will be used for commercial purposes. The amendments are final, and despite several negative European Commission remarks, 78 MPs voted for them, 31 against (out of 240, which is a whole different story). The newly-adopted amendments effectively serve the lobbyist interests of several privately held companies, according to the opposition.

What do these amendments actually mean? Well, some people will get legal and tax breaks for building ski resorts, hotels and golf courses on land that will still be listed as actual forests in official documents. The official legal green light will save them money, time, tons of paperwork and, of course, sundry other forms of expense. Now isn’t that neat?

Despite numerous protests by environmentalist groups, random treehuggers and people that just do not want to go have a day out in the mountains, only to be surrounded by a pathetic and ugly concrete jungle (that raises the legitimate question whether those architects were bred and raised in a dark room without any human interaction), the amendments managed to see the light of day.

Why? We are not really certain. But when people, such as an MP with an actual criminal record who had been ordered to pay court expenses in a lawsuit that they themselves started, are involved, one can only wonder. (We do breed a particular breed of extra epic fail MPs, in case you wonder, and then we elect them to Parliament and as prime ministers.)

What will these amendments mean for the future? Well, we will see a bunch of progressive builders, who will climb on mountain tops and will start pouring concrete and other fancy construction materials that will eventually turn into some things that should be hotels, but will look like massive misconceptions of modern architectural art.

There will be more protests on June 14.