Just days after Lady Gaga was prevented from performing in Indonesia after local Muslim fundamentalists labelled her a devil, she was condemned by the Bulgarian Orthodox Church’s very own controversial fundamentalist, Metropolitan Nikolai of Plovdiv.

Nikolai stopped short of anathematizing the singer, but speaking to journalists in Bulgaria’s second city – just a few months before Lady Gaga is due in the capital for an August 14 concert performance – said that “our nation is unprepared for spiritual temptations”, and called for “vigilance” again evil taking over the spiritual space of the homeland.

He urged people to keep their children from the temptations of sin. However, he did not, local media noted, link the advent of Lady Gaga to the recent series of earthquakes in Bulgaria – unlike his controversial statement a few years ago that the deaths by drowning of Bulgarian holidaymakers in Lake Ohrid were Divine punishment for a Sofia concert by Madonna.

Nikolai was among clerics who spoke out against Madonna performing in Sofia on a day that the Bulgarian Orthodox Church commemorates the beheading of John the Baptist.

Like Gaga, who made headlines by offending Thailand’s authorities by saying that she intended shopping in the country for a “fake Rolex”, Nikolai allegedly has lavish tastes and has been targeted by local media for his use of a luxury car and apparently real Rolex.

Nor in other ways is Nikolai a stranger to controversy. The cleric, in his 40s, earlier described how he had sought to bar access to the “Holy of Holies” of Sofia’s Alexander Nevsky cathedral to prevent the entry of then-Pope John Paul II, whom he described – along with the Roman Catholic leader’s cardinals – as heretics whose presence would render the sacred place ritually unclean.

On the accession of the current Pope, Benedict XVI, Nikolai confirmed in a radio interview that he viewed the Roman Catholic chief as a heretic, a statement that soured ecumenical relations in the Bulgarian city which has the country’s largest proportion of Roman Catholics.

Nikolai has a long track record of ultra-conservative views, having expressed public regret that Bulgaria’s accession to the European Union would make it impossible to ban gay parades and having spoken out against Bulgarian law reforms on civil unions as “legalising adultery and fornication”.

He conferred a church honour on the then-mayor of the town of Pazardzhik for issuing a by-law banning any form of parade that highlighted sexual orientation – though this ban was subsequently ruled legally indefensible.

More recently, Nikolai has been in the news in Plovdiv for controversial redecorations of the city’s principal San Marina church. He responded to critics who petitioned against his covering-over of ancient iconography with modern wallpaper matting depicting icons by labelling them “satans”. 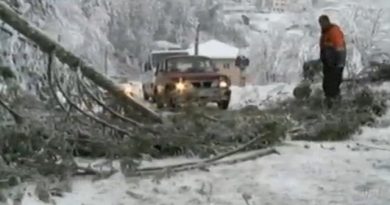 Bulgaria’s ruling majority on boycott by Mareshki party: ‘No crisis’