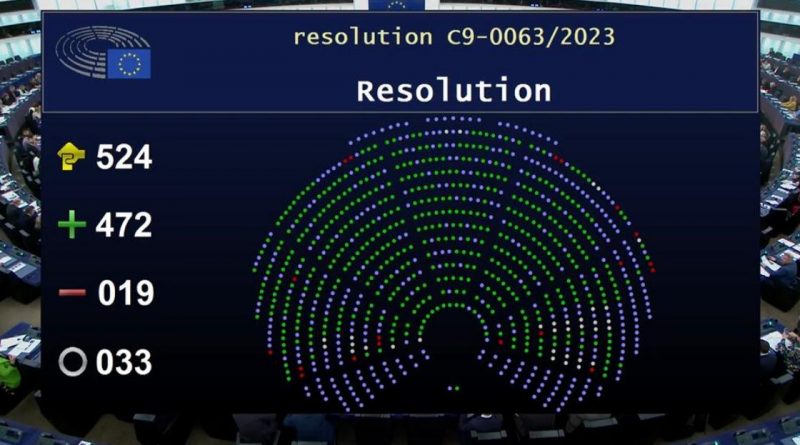 The European Parliament voted by a large majority on January 19 to call for a special tribunal of Russia’s crime of aggression against Ukraine.

The resolution, adopted with 472 votes in favour, 19 against and with 33 abstentions, took into account previous resolutions, in May against impunity for war crimes in Ukraine, and in November, recognising Russia as a state sponsor of terrorism.

Since February 2014, Russia has waged an illegal, unprovoked and unjustified war of aggression against Ukraine, which it relaunched on February 24 2022 with a massive invasion of Ukraine, the resolution said.

“The Russian Federation’s war of aggression against Ukraine constitutes a blatant and flagrant violation of the UN Charter, the fundamental principles of international law and various international agreements,” it said.

“Thousands of civilians, including children, have already been murdered and many more tortured, harassed, sexually assaulted, kidnapped or forcibly displaced; whereas this inhumane conduct by the Russian forces and their proxies is in total disregard of international humanitarian law.”

It underscored “the urgent need for the EU and its Member States, in close cooperation with Ukraine and the international community, preferably through the UN, to push for the creation of a special international tribunal to prosecute the crime of aggression against Ukraine perpetrated by the political and military leadership of the Russian Federation and its allies and to find a legally sound, common way forward on this matter”

The European Parliament said that it believes that establishing such a tribunal would fill the large gap in the current institutional international criminal justice set-up and should be based on the standards and principles that apply to the International Criminal Court.

It called for EU institutions and countries to work in close cooperation with Ukraine to seek and build political support in the UN General Assembly and other international forums for creating the special tribunal for the crime of aggression against Ukraine.

“The establishment of the special tribunal would complement the investigative efforts of the ICC and its Prosecutor, as it would focus on alleged genocide, war crimes and crimes against humanity committed in Ukraine; reiterates its full support for the ongoing investigation by the Prosecutor of the ICC into the situation in Ukraine.”

The resolution said that the European Parliament “strongly believes that the establishment of this special tribunal for the crime of aggression would send a very clear signal to both Russian society and the international community that Putin and the Russian political and military leadership can be convicted for the crime of aggression in Ukraine; underscores that the establishment of this tribunal would also be a clear signal to the political and business elite in Russia and Russian allies that it is no longer feasible for the Russian Federation under Putin’s leadership to return to ‘business as usual’ with the West”.