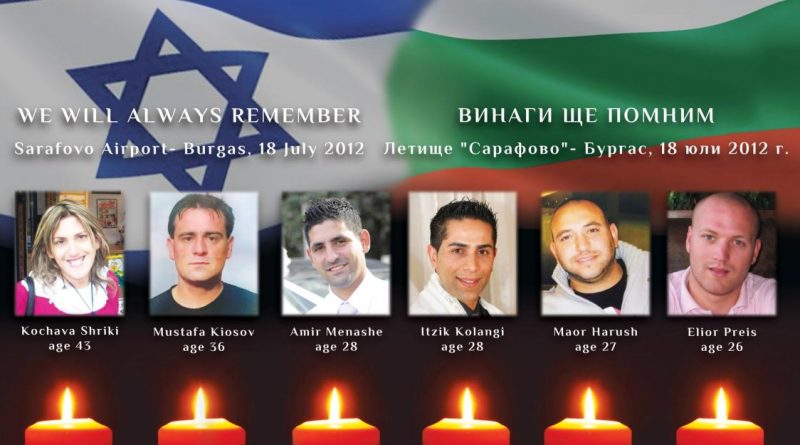 A solemn commemoration was held at Bourgas Airport on July 18 to mark the 10th anniversary of a terrorist attack in which five Israelis and a Bulgarian died and close to 40 were seriously injured.

In a statement ahead of the commemoration ceremony, Bulgaria’s government said: “We remain intransigent against violence, hatred and encroachments on the lives of innocent citizens.

“Terrorism has no justification. In the fight against it, united by our friendly relations, we continue to develop fruitful cooperation with the Israeli side in the interests of the prosperity of our two peoples,” Bulgaria’s government said.

Those who died in the attack were Israeli citizens Maor Harush, Itzik Kolangi, Amir Menashe, Elior Preiss, Kochava Shriki and Bulgarian Mustafa Kyosov, the driver of the bus that was the target of the terrorist attack.

The commemoration ceremony was attended by, among others, Israeli ambassador Yoram Elron, US ambassador Herro Mustafa, Bourgas mayor Dimitar Nikolov, Military Medical Academy head Ventsislav Mutafchiyski, Tsvetan Tsvetanov – who was Interior Minister at the time of the attack – MPs from various parties and relatives of the victims.

A moment of silence was held in tribute to the victims and candles lit in their memory.

An international investigation led by Bulgaria into the terrorist attack found that Hezbollah was culpable.

Charges were lodged in July 2016 in the Specialised Court against Meliad Farah and Hassan el-Haj Hassan. The bomb-bearer, Mohamad Hassan El-Husseini, died in the attack.

The two accused, tried in absentia, were sentenced to the severest penalty allowed by Bulgarian law, life imprisonment without parole. The sentence was upheld in April by the Specialised Appellate Court, while Hassan el-Haj Hassan’s sentence is currently being appealed in the Supreme Court of Cassation.

The two accused were also ordered by the court to pay to the heirs of the six dead and the 38 seriously injured in the attack damages totalling a record 100 million leva (about 50 million euro).