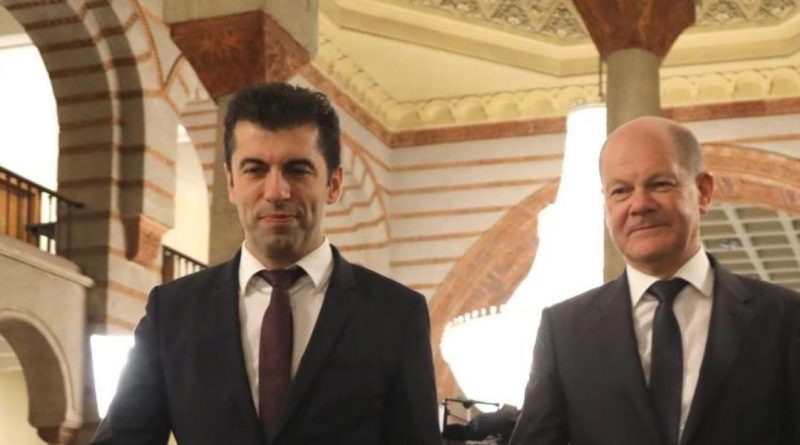 Speaking on June 11 after talks in Sofia with Bulgarian Prime Minister Kiril Petkov, German Chancellor Olaf Scholz expressed strong support for a deal that would see the start of EU accession talks with North Macedonia and Albania.

Scholz, who arrived in the Bulgarian capital city after a visit earlier in the day to Skopje during a rapid tour of Balkan countries, discussed the war in Ukraine and the reduction of energy dependence on Russia with Petkov.

Progress on EU accession talks with North Macedonia and Albania is a priority for the German chancellor, with Scholz hoping for progress before the close of the French Presidency of the Council of the EU at the end of June 2022.

Bulgaria has been standing in the way of the opening of accession talks with North Macedonia, until its stated conditions are met, while the issue is a vexed one within Bulgaria ruling majority, to the extent of being cited this week by the ITN party as one of its pretexts for leaving that coalition. Critics of Petkov repeatedly have claimed that he is plotting to lift Bulgaria’s veto on North Macedonia’s EU membership talks, a claim that he has equally repeatedly denied.

Scholz told a news conference after his talks with Petkov: “Germany understands that it is not easy to overcome historical differences between neighbouring countries, but our experience shows that it is enriching for all when it comes to overcoming mistrust and building friendly relations with neighbours.

“I therefore strongly support an agreement to start negotiations. I believe that there is a chance for progress,” Scholz said.

“We will continue the discussion and exchange between us until the end of the French [EU] Presidency and I hope we will make progress. I am convinced that together we Europeans, we are responsible for the EU and for the stability of the Balkans, and it is important that we use the enlargement process now for the benefit of Europe,” he said.

Scholz said that it was 20 years since the Thessaloniki Agenda, which embraced the European integration of the countries of the Western Balkans.

“We thought that this process would be resolved within 10 years, but they are long gone. Our task is to make progress,” he said.

Petkov said that Bulgaria and Germany always had looked to the EU accession of the Western Balkans.

He said that the Bulgarian government had clearly stated its position on the conditions that must be met in order for the European integration of North Macedonia to continue.

These conditions included the recognition of a Bulgarian minority in North Macedonia’s constitution, so that their rights could be protected.

Another priority for Bulgaria’s government is to see the good-neighbourliness agreement implemented, with an end to hate speech against Bulgaria and an end to disputes over shared history.

“Bulgaria has three main priorities, about which the EU must be part of the guarantees, so that we can move forward – through the European process, to ensure the inclusion of Bulgarians in the constitution of North Macedonia,” Petkov said.

“At the same time, we have a framework position and a good-neighbourliness agreement. So each decision must include these three priorities,” he said.

“The EU can provide potential opportunities to have European guarantees that this will happen, so we continue to work as a government within the existing framework position and good-neighbourliness agreement,” Petkov said.

Kovačevski said that Skopje wanted bilateral disputes settled, but expressed doubts as to whether Sofia is ready for the same.

According to Kovačevski, the topic had become the subject of domestic political conflict in Bulgaria and no predictions could be made.