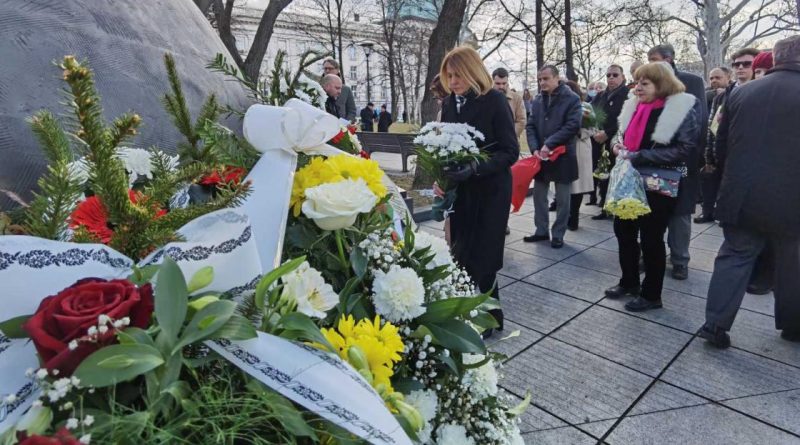 Bulgaria marked on March 10 the 79th anniversary of the prevention of the deportation of the Bulgarian Jews to the Nazi death camps of the Holocaust, while the day’s ceremonies also commemorated the 11 343 Jews deported to their deaths from territories then under Bulgarian administration.

At the opening of its sitting, the National Assembly observed a minute of silence in honour of the victims of the Holocaust and crimes against humanity.

“Today we are proud to recall that 79 years ago the Bulgarian people performed a feat and saved their compatriots Jews from the death camps,” National Assembly Speaker Nikola Minchev said.

Minchev said that the fate that befell 11 000 Jews from northern Greece and parts of the former Yugoslavia, then under de facto German rule, who were not saved, was a wound that had not healed.

“Today we have occasion to state again that we will oppose all manifestations of xenophobia, racism, religious and ethnic hatred, both in our country and everywhere in the world,” Minchev said.

Bulgaria’s government said that 79 years ago, Bulgarian society had shown extremely strong will and courage, managing to stop the deportation of nearly 50 000 Jews in Bulgaria to concentration camps.

This was a historic feat, “the work of our nation as a whole – from politicians, through civil society, the church and ordinary people,” the government said.

“Today, we must remember and honour all the victims of the Holocaust, as well as the people who experienced the horror of war. We must do our best not to allow such tragedies in these days,” it said.

A wreath-laying ceremony, organised by the Organization of the Jews in Bulgaria “Shalom”, was held at the monument of gratitude in central Sofia.

This year’s ceremony was dedicated to the 20 Bulgarians listed as Righteous Among the Nations.

The ceremony was attended by Speaker Minchev, Sofia mayor Yordanka Fandukova, the ambassadors of Israel and the United States, MPs, children from the Ronald Lauder School and leaders and members of the Bulgarian Jewish community.

“Bulgaria has taught the world a lesson in humanity. Bulgarians have shown that human life is most important…Bulgarians have sent a message to future generations that people can make a difference,” Israeli ambassador Yoram Elron said.

A message from President Roumen Radev was posted on the presidency’s website.

“Traditionally, on March 10 we celebrate the bright feat of salvation of the Bulgarian Jews and at the same time we mourn for all the victims of that cruel and gloomy era,” Radev said.

“In recent days we live with the feeling that the world is at a historical crossroads, which can revive unforgivable mistakes of the past, sow the seeds of new injustices and sufferings. That is why today the example of our ancestors shines especially brightly,” he said.

“And it is no coincidence that many Bulgarians, worthy of their successors, are opening their hearts – this time to the innocent victims of a fratricidal war,” Radev said, referring the current Russian invasion of Ukraine that began on February 24 on the orders of Russian President Vladimir Putin.