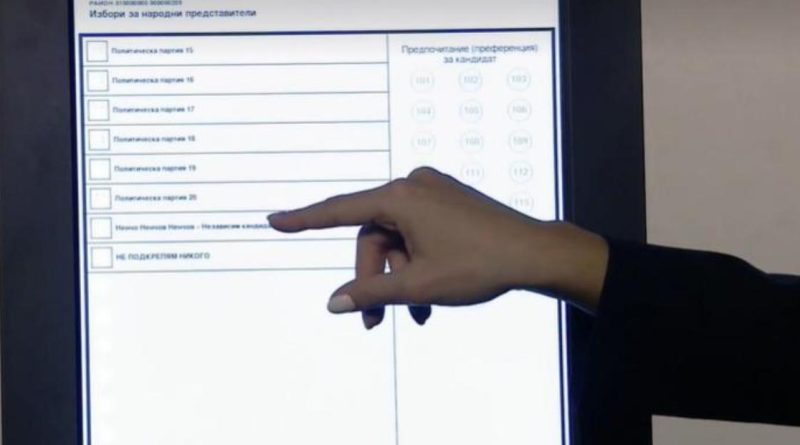 Recent polls say that GERB-UDF will win the largest share of votes in the elections for the National Assembly, Bulgaria’s third this year, but other groups seen as likely to win seats have vowed to keep Borissov’s coalition out of government.

GERB-UDF last weekend alleged that 228 voting machines were in a warehouse, to be used to slant the vote against it. Borissov has alleged that there would be technical manipulations, with his coalition claiming that there was a way for voters to vote twice.

Then, on November 10, the Central Election Commission (CEC) received a letter saying that there were 199 further allegedly unregistered voting machines, stored with supplier Ciela Norma.

Bulgarian National Television (BNT) reported the CEC as saying that there was no irregularity about the 199 voting machines, but there was a problem in communication between Ciela Norma and the commission.

CEC spokesperson Tsvetozar Tomov said: “Why did Ciela Norma explain to the CEC on November 3, and to the public, that those 228 machines – the other 228, apart from the 199 – are intended for their operations in Georgia and Albania, and now in yesterday’s letter to the CEC they say they want them to be used for repair work regarding the devices for machine voting on election day?”

Tomov gave an assurance that only machines checked and certified in the manner determined by the CEC would be used.

BNT said that the CEC had asked Ciela Norma for clarification about the additional machines, with the commission giving a reminder that Bulgaria’s Electoral Code says that unserviceable machines cannot be replaced on election day. In the event of a machine not working, the polling station must go over to using paper ballots.

“In the past few days, we have received letters from Ciela about nearly 600 machines that would not, first, be used on the territory of Bulgaria, should be used for demonstration voting in Albania and Georgia, then it turned out that they should be for spare parts, but the Electoral Code is clear and unequivocal, when due to insurmountable external circumstances machine voting cannot be held, voting is switched to paper ballots,” CEC member Krassimir Tsipov said.

Ciela Norma Vesselin Todorov was adamant that there was no discrepancy in the information the firm had supplied.

“These machines are precisely for this purpose, that now, before the election, and that we can repair between the two rounds (of the presidential election), if there is a second round, to be able to replace or repair damaged machines, unfortunately, they may not be enough, we have no longer have the opportunity to import more,” he said.

On November 11, Todorov was called to the Interior Ministry for questioning.

Caretaker Interior Minister Boiko Rashkov, who ordered an investigation into the voting machines matter, said that the investigation was continuing but so far there was no evidence that the additional machines would be used for irregularities in the elections.

At a news conference on the afternoon of November 11, the CEC’s Tomov said that there was no practical possibility of unregistered devices being used in the elections.

The CEC said that it has 12 837 machines, with enough devices in reserve, to be sent abroad in the event of a second-round presidential election. It said that it had never given permission to replace machines on election day and had no such intention.

(Screenshot from an information video, released ahead of the November 14 elections, on how to use a voting machine)