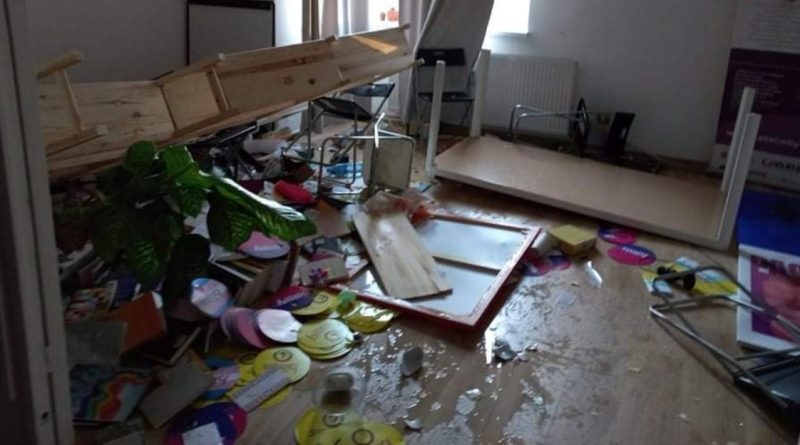 A group alleged to be from the extremist Bulgarian National Union and led by its presidential candidate Boyan Rasate ransacked the Rainbow Hub LGBTI community centre in Bulgaria’s capital city Sofia on the evening of October 30.

Activist Gloria Filipova of the Rainbow Hub told the media during the course of the assault, in which there was extensive damage to property at the centre, Rasate struck her in the face.

The assault took place during a trans theme event at the centre.

Filipova told Nova Televizia that during the event, there was a knock at the door.

“A group led by Boyan Rasate entered. I started shouting that they couldn’t come in and then he hit me. They started breaking everything. It all lasted a few minutes. I called 112 [the universal emergency number],” she said.

“In the end, Boyan Rasate and another man remained. I had said that they had done their job and could leave, but he replied that he had not finished yet and took out a knife and cut the tyres of a scooter that was here. The knife was not used against us, but there was a weapon,” Filipova said.

The Rainbow Hub project was founded with the aim to increase the capacity and mobilise the LGBTI community by supporting eight self-support groups at the community centre, to provide advocacy training and to support advocacy initiatives for each group.

A recent post by the Bulgarian National Union, a minority far-right group that espouses ultra-nationalist causes, said that at the Rainbow Hub, there was “direct gender propaganda” aimed at children.

“We, the Bulgarian National Union and Kubrat Youth, categorically oppose such influences and perversions in Bulgaria,” said the post, adding a line – with the use of expletives – they would do “everything possible” to stop it. “Don’t be tolerant, be normal,” the post said.

After the attack on the Rainbow Hub, the post was deleted.

Manuela Popova, communications manager at Bilitis Foundation, noted that the attack came a few days after a petition with 8000 signatures had been lodged at Bulgaria’s Justice Ministry calling for the inclusion of anti-LGBTI crimes in Bulgarian legislation.

The Rainbow Hub incident is far from the only homophobic one in Bulgaria recently. There were a string of such incidents ahead of the 2021 Sofia Pride, and in recent years.

Popova told the media that this was not the first such case at the centre, which had received threats. Abusive stickers had been pasted on the centre’s doors.

Contacted by Nova Televizia for comment, Rasate said that he would not comment, as his civil rights enabled him to refrain from commenting.

“The community should not be surprised by such attacks. They are engaged in propaganda among minors. It is only natural that something like this will happen,” he said.

The Rainbow Hub attack came with presidential and early parliamentary elections in Bulgaria two weeks away.

In a statement on October 31, the We Continue the Change party condemned the attack as horrific.

“The fact that the leader of this gang is a presidential candidate only reinforces the horror of this event,” the party said.

“Every Bulgarian citizen, regardless of gender, religion, beliefs, physical or mental constraints, or sexual orientation, should be protected and secure in his home and office and his personality and property cannot be subject to assault,” it said.

It called on the authorities to remove the immunity from prosecution that Rasate has as a presidential candidate, and for the arrest of the rest of the group.

The Democratic Bulgaria coalition said that it strongly condemned the attack on the Rainbow Hub.

“Obviously, this is not an isolated or domestic incident, but another stage of an escalating campaign of planned aggression,” the coalition said.

Democratic Bulgaria said that the impunity with which previous acts of harassment had been treated had provided the motivation to transition to open vandalism and voolence.

“Moreover, it is an unacceptable use of physical violence for political purposes in an active national campaign.”

Noting the media reports that it had been carried out under the personal leadership of Rasate, the coalition said that the Bulgarian National Union “consistently works to infect our political and public life with extremism through the covert use of fascist methods and style”.

“We expect quick, effective and firm action by all law enforcement agencies. We call on all responsible political forces to unequivocally condemn the use of violence and harassment, especially when it is done for political purposes,” Democratic Bulgaria said.

GERB-UDF leader Boiko Borissov said in a Facebook post: “We condemn the attack on an LGBT office, with a girl beaten by some presidential candidate”.

“It is unacceptable for people who are different to be attacked and physically assaulted. We condemn all violence and the perpetrators must be held accountable,” Borissov said.

Associate Professor Alexander Oscar, president of the Organization of the Jews in Bulgaria “Shalom”, said in a Facebook post: “When hate speech turns into physical assaults, when the hatred is so strong that beating a young girl just because she has a different sexual orientation doesn’t matter, then nothing good awaits us as a society”.

Meanwhile, a fundraising initiative has been launched by Rainbow Hub for the repair of the centre.

Or via paypal at [email protected]

For international donations in euro: 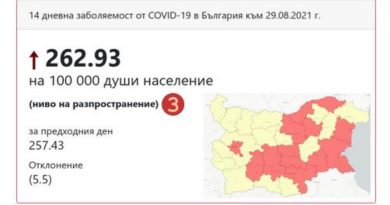