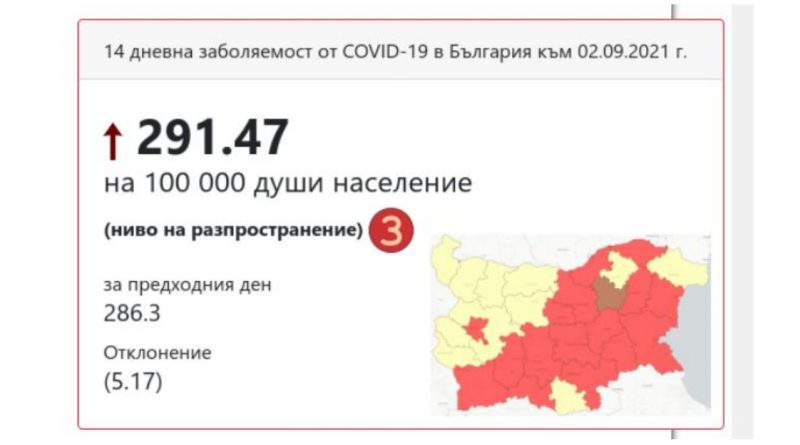 Sixteen out of the 28 districts in Bulgaria are Covid-19 red zones, meaning a morbidity rate between 250 and 499.9 per 100 000 population, according to an update posted by the National Centre for Infectious and Parasitic Diseases (NCIPD) on September 2.

One district, Turgovishte, is a dark red zone, meaning an infection rate above 500 per 100 000 population.

The update from the NCIPD came as Bulgaria’s caretaker Health Minister Stoicho Katsarov announced, as The Sofia Globe reported earlier, amended measures against Covid-19, to take effect on September 7 – the day after the country’s Unification Day long weekend – and remain in effect until October 30.

“The low vaccination rate is forcing us to impose new measures against the spread of the virus. We are registering both an increase in the number of patients admitted for hospital treatment, including in intensive care units, and mortality,” Katsarov told a news conference.

“Eighty-five per cent of the dead are people over 60 years of age. Our last place in vaccination naturally gives us first place in terms of mortality from Covid-19,” Katsarov said.

According to a September 2 update by the European Centre for Disease Prevention and Control, only 20.3 per cent of Bulgaria’s population have completed the vaccination cycle against Covid-19.

NCIPD head Professor Iva Hristova told the news conference that currently in Bulgaria, there was a complete dominance of the Delta variant of Covid-19.

“Ninety-eight to 99 per cent of the samples have the Delta variant and one to two per cent the Alpha variant,” Hristova said.

“In the Delta variant, practically one person infects six to eight of the people around him, which makes it dominant not only in our country, but also in Europe, America and Asia,” she said.

According to Katsarov, “There is no room for panic at the moment. The situation is serious, but it is not out of control”.