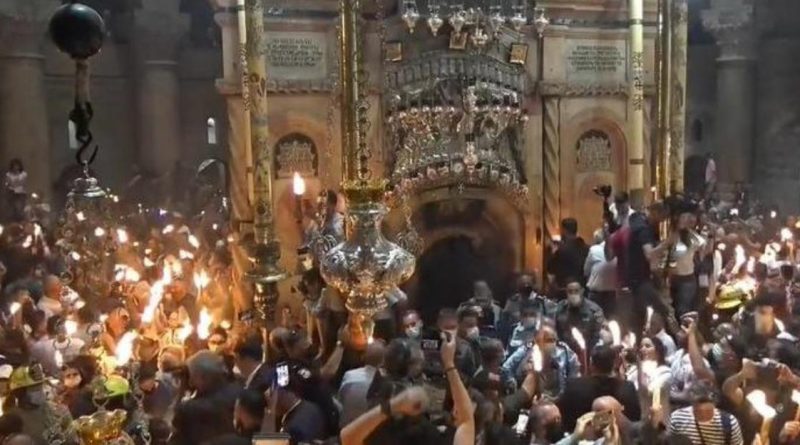 In an annual ceremony revered by Orthodox Christians as a key part of Easter celebrations, the “Holy Fire” appeared in the Church of the Holy Sepulchre in Jerusalem on May 1.

Orthodox Christians believe that the “Holy Fire” appears at Easter in the church as a result of a Divine intervention, and regard the event as miraculous.

As part of measures against Covid-19, State of Israel authorities did not allow delegations from foreign Orthodox churches to come to the Church of the Holy Sepulchre to receive the flame.

A delegation from the Bulgarian Orthodox Church was among those that waited at Ben-Gurion Airport in Tel Aviv to receive the flame, to take to Sofia and from there to distribute to churches across the country as the church marks Easter Saturday.

Outgoing Prime Minister Boiko Borissov’s Cabinet provided the use of a government Falcon aircraft for the Bulgarian Orthodox Church delegation, headed by Metropolitan Grigorii of Vratsa, to fetch the “Holy Fire”.

All those in attendance for the ceremony had to have certificates proving that they had received both doses of vaccines against Covid-19 and a negative test dating from 24 hours within their arrival in Israel.

Ahead of the celebration of the Orthodox Easter, in a country where the majority of the population claim adherence to this faith, the Sofia metropolitanate issued a reminder of anti-epidemic measures in Bulgarian Orthodox churches.

These include physical distancing of 1.5 metres, wearing a protective mask covering the nose and mouth – though this rule does not apply to officiating clergy – and disinfection of the premises and holy objects in churches.

Occurences of miraculous flames are recorded in texts dating back to the fourth century CE, though the “Holy Fire” ritual became formalised later.

Eastern Orthodoxy is alone in recognising the validity of the “Holy Fire”.

The event is not recognised by the Roman Catholic Church, with a Pope several centuries ago having dismissed it as a fraud. The world’s second-largest group of Christians, Protestants, also do not recognise it as legitimate.

(Screenshots from Bulgarian National Television’s live broadcast of the ceremony)