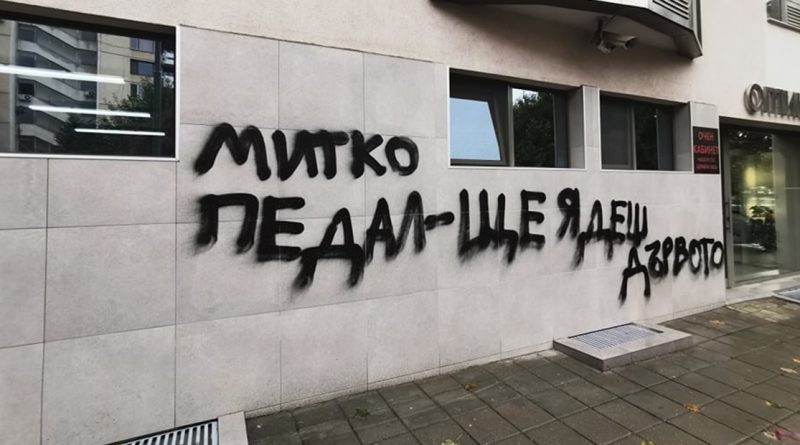 The homes of two of the participants in the October 10 “Plovdiv Against Hatred” event have been daubed with graffiti threatening them with death, news website podtepeto.com reported on October 12.

At the October 10 event, police intervened to prevent a large group of dark-clad close-cropped young men from reaching participants in the “Plovdiv Against Hatred” event, which was held as a response to a homophobic attack in a park in the Bulgarian city in late September.

The report said that on Monday morning, vulgar graffiti was daubed on the homes of two of the participants. Both mentioned their names, with one reading, in part: “You will hang on the rope”.

In response to the graffiti incident, one of the participants in Saturday’s event, Manuela Popova, posted on Facebook: “Imagine, you go home and you see this in the building where you live. The reason? Ivelina is an LGBTI + activist who supported, attended and spoke during a pride march in Plovdiv the other day. A march that took place after young people were physically attacked in a park simply because they exist, as LGBTI +.

“This is shameful, that this is the country we live in. In which young people cannot stay in the park, in which citizens cannot go home. In which lovers can not hold hands. Because we ‘parade’? Because these are not Bulgarian values? What are the Bulgarian values? That which is in the picture?”