Bulgarian President Rossen Plevneliev has commented on the attempted move by ultra-nationalist party Ataka and a group of pro-government protesters to impeach him, saying that he “believes and hopes” that those who sign the impeachment petition will not be motivated by “certain political party interests”.

The campaign to impeach Plevneliev was sparked by his special live address to the nation on July 5, in which he said that the only effective way out of the current political crisis in Bulgaria was early elections.

Within the next few hours, Ataka leader Volen Siderov said that he would seek the impeachment of Plevneliev – and his trial for treason – while a group of protesters who have been gathering daily said that they would raise a petition for Plevneliev’s impeachment.

Speaking on July 9, Plevneliev said that he respected people’s right to launch petitions.

“Over the past months I proved, through my actions, that I am independent. I backed the referendum (on the resumption of the construction of Belene nuclear power station, in January 2013) and its organisation, for which many political parties gave a critical evaluation.

“I also supported the protest in February, which met with criticism, too. It is not news that the President is independent. The major message in my recent statement was not to boycott the nation and to work together. Since my statement met with so much criticism, it means that it worked,” Plevneliev said.

He said that he hoped that most people would first read what he had said and then make their own decisions.

On July 8, the Bulgarian Socialist Party, the second-largest of the four parties in Bulgaria’s 42nd National Assembly, said that it would not support a motion to impeach Plevneliev, even though the party believe that the President’s statements recently had been “intemperate and inappropriate”.

The BSP would not assist Ataka in that party’s attempt to destabilise the country, BSP MP Petar Mutafchiev said.

In any case, it is more than improbable that a motion to impeach President Plevneliev would succeed in Parliament.

According to article 103 of the Bulgarian constitution, “an impeachment shall require a motion from no fewer than one quarter of all Members of the National Assembly and shall stand if supported by more than two-thirds of the Members.”

The National Assembly has 240 members, meaning that an impeachment motion would require the backing of 160 MPs. It is certain that GERB, with 97 MPs, would vote against, leaving only a potential total 143 votes even if the BSP, Movement for Rights and Freedoms and Ataka all voted in favour. With the BSP having now said that it would vote against, chances of Ataka’s motion succeeding are even tinier – but, again, in any case as the constitution says, 60 votes would be required for the House to even discuss the motion. It is unlikely that even those votes could be raised. 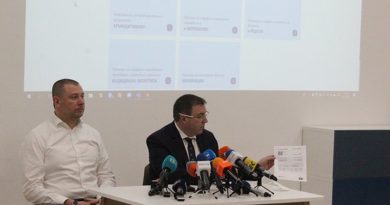