Bulgarian authorities have issued the “Code Orange” warning of dangerous weather for six districts in western Bulgaria because of strong winds and heavy rain forecast for October 13.

The districts covered by the warning were Pernik, Kyustendil, Blagoevgrad, Pazardjik, Smolyan and the district, but not city, of Sofia. The capital city, like the rest of the country, was subject to the lesser “Code Yellow” warning.

Nine districts were under “Code Yellow” warning for both rain and strong winds – Vidin, Montana, Vratsa, Pleven, Lovech, Sofia, Plovdiv, Stara Zagora and Kurdjali. The rest of the country was on alert for strong winds only.

Bulgaria’s meteorology institute said that the cloud cover over western Bulgaria was expected to increase on the evening of October 12, with rain forecast overnight into Tuesday.

Daily highs on October 13 in western Bulgaria were expected to be in the 16C-19C range, several degrees Celsius lower than on Monday, while the eastern part of the country would see highs in the 24C-26C range.

For the rest of the week, the meteorology institute forecast intermittent cloud cover with daily highs in the low twenties, followed by cooler weather and increased chance of rain at the weekend. 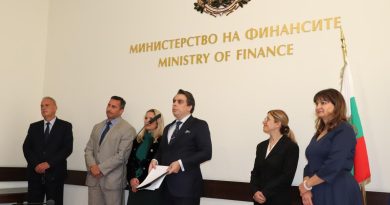