The number of active cases of Covid-19 in Bulgaria has increased by 69 in the past 24 hours to a total of 4327, according to data posted on July 20 by the national information system.

The death toll has risen by one to a total of 300.

A total of 3155 PCR tests were done in the past day, of which 95 proved positive.

This figure is in comparison with the 196 positive results reported on July 19, after 2003 PCR tests were done – significantly lower than the 4484 done the day before and the record 6526 the day before that.

Twenty-five people recovered from the virus in the past day, bringing the total to 4106.

There are 610 patients in hospital, an increase of five in the past day. Thirty-four are in intensive care.

The number of medical personnel who have tested positive is 567, unchanged from the previous data posted by the national information system. 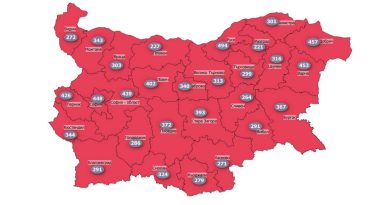 For sixth week, every district in Bulgaria is a Covid-19 ‘red zone’