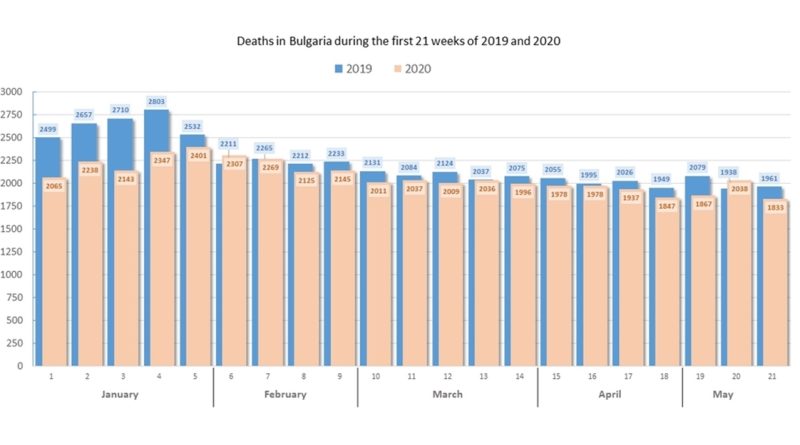 A trend of deaths in Bulgaria being significantly lower in the first 21 weeks of 2020 than by the same time in 2019 is shown by graphs by the National Statistical Institute (NSI).

The trend first emerged when Health Minister Kiril Ananiev announced in Parliament that deaths in the first four months of 2020 were lower than in January to the end of April 2019.

The national operational headquarters said on May 24 that the number of deaths of people who had tested positive for Covid-19 by that date was 130. These deaths include those who had other illnesses and those that did not.

“Data for 2020 are preliminary. Please note that there will be variance in data by weeks, due to delays in registering / processing of the death certificates,” the NSI cautioned.

A separate graph shows a trend in the last three weeks of May 2020 of a decline, compared with each previous week, in the increase in the number of confirmed cases of Covid-19 in Bulgaria.

A further positive trend is shown in another graph – that for two consecutive weeks, those ending on May 24 and May 31, the number of registered employed who got jobs on contract exceeded the newly-registered unemployed in those weeks.

One graph, however, is much grimmer – the one showing foreign visitors arrivals in January – April 2020 compared with the first four months of 2019. The impact of border closures and drastic reductions in flights is clear.