Bulgaria’s Finance Ministry said on August 30 that the consolidated Budget surplus for the first seven months of 2019 was 3.22 billion leva, or 2.8 per cent of this year’s estimated gross domestic product, narrowly exceeding the ministry’s 3.2 billion leva forecast issued last month.

The sharp drop was due to the lump-sum payment to the US of $1.2 billion under international government procurement contracts to acquire eight F-16 Block 70 aircraft and related equipment and armaments.

Revenue in January-July was 25.98 billion leva, well above than the 22.55 billion leva recorded during the same period of last year. Tax revenues were up by 9.2 per cent compared to the first seven months of last year, at 20.49 billion leva.

Budget spending was 22.76 billion leva in January-July, up from 20.53 billion leva in the same period of 2018. In part, that was due to higher pension and health insurance payments resulting from pension hikes in July 2018 and 2019, wage hikes in the education sector, but also increased capital spending using EU funds, the ministry said. 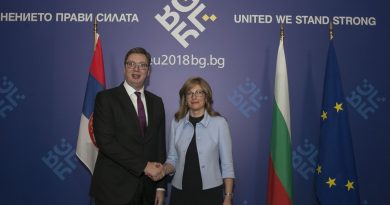