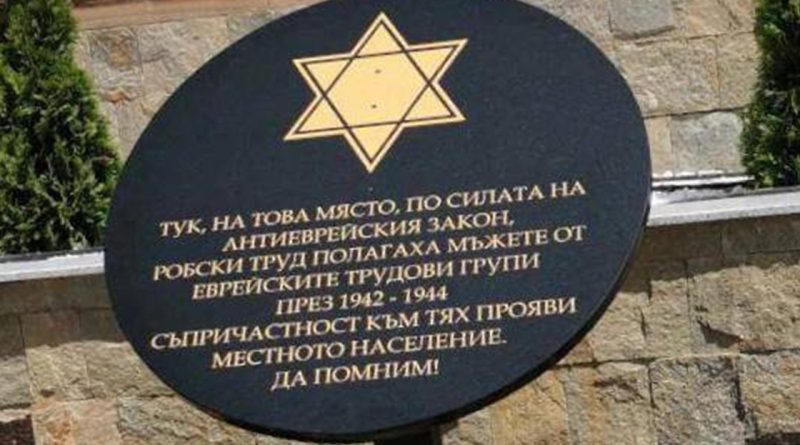 To that second sentence, the first reaction of many might be that surely that is true, that there was no Holocaust in Bulgaria. After all, the planned deportation of Bulgarian Jews to Hitler’s Holocaust death camps was prevented. Memorials, books, genuine documents and personal recollections attest to the fact.

But the fact to which these attest is that were no deportations, at least from the pre-Second World War boundaries of Bulgaria – while more than 11 000 Jews from deported to be mass-murdered at Treblinka from the so-called “new lands”. They do not attest to the assertion that the Holocaust did not happen in the country.

All of this came to the fore in recent days after, for the second time since 2018, a memorial plaque was unveiled commemorating a camp where Bulgarian Jewish men were forced to do slave labour during the Second World War.

The plaque was unveiled in the southern Bulgarian town of Nedelino, where Bulgarian Jewish men were forced to work on road-building projects in extremely harsh, not to say inhumane, conditions.

The ceremony was attended by, among others, Israel’s ambassador Irit Lilian, who called for such memorial plaques to be unveiled at the sites of all of Bulgaria’s known slave labour camps for Jewish men. Also represented were the Organization of the Jews in Bulgaria “Shalom” and the Friends of Israel in Bulgaria “Negev”, key to the continuing initiative to commemorate this aspect of the antisemitic policies of Bulgaria when it was allied to Hitler’s Axis.

For all the representation of Bulgaria’s major mainstream representative Jewish organisation, a fringe group got a platform to attack the initiative.

In a report a day after the Nedelino ceremony, Bulgarian National Radio broadcast an item titled “Jewish organisations object to inscriptions placed on monuments that recognise that there was a Holocaust in Bulgaria”.

The report listed the organisations objecting as the Jewish Patriotic Institute, the Institute for National Patriotic Policy, the Bozhidar Dimitrov Club for Solidarity with Bulgarian Statehood and the Bulgarian-Jewish Research Institute.

These organisations accused the initiative of “staining” the name of Bulgaria, and meant that public funding was leading to “distortion of historical truth and suggestions that Bulgaria did not save its Jews”. Mayors of towns where such monuments were put up “do not know the history in detail,” they claimed. A separate report described Shalom as “anti-Bulgarian”.

To the defence of legitimate history, the Marginalia human rights organisation and Shalom, with the backing of Sofia municipality, organised a round table of reputable Bulgarian historians, on the topic of antisemitic legislation and violations of the Turnovo constitution at the time of the Second World War.

Moderated by New Bulgarian University’s Dr Roumen Petrov, the panel included historian Borislav Dichev, author of numerous publications, Associate Professor Roumyana Christidi of the Institute of Hebraic Studies at Sofia University, Nikolia Poppetrov of the Institute of History at the Bulgarian Academy of Sciences, also an author of numerous publications including on themes from the period discussed, and Associate Professor Alexander Oscar, president of Shalom.

Dichev underlined in detail the facts – “because the foundation of historical science is the facts and the comparative analysis of these facts,” he said – of the legislative framework of the time that seriously violated the 1879 Turnovo constitution, a progressive founding document that had granted equal rights to all citizens of post-Liberation Bulgaria.

The first stage of this violation was the radical cutting away of the economic, social, civil, spiritual, religious rights of the Jews in the Kingdom of Bulgaria, which had gradually led to their isolation from public life. With Bogdan Filov as Prime Minister, the government had imposed severe restrictions on Bulgarian Jews, while at the same time – and in violation of the Turnovo constitution – burdening them with enormous taxes.

In its dealings with the “new lands” in neighbouring countries that came under Bulgarian administration, Bulgaria had violated international treaties to which it was party through its treatment of the Jewish population.

Further, the legislature had violated the Turnovo constitution by ceding to the Cabinet legislative functions regarding the so-called “Jewish question”. This law had been approved even over the objections of some members of the ruling majority.

“It is historical truth that all these acts cannot be qualified as actions to mitigate the persecution of the Jews or to alleviate their fate. These are the actions of those with the highest authority, people for whom there was a ‘Jewish question’ in Bulgaria, which in their opinion must be ‘finally solved’,” Dichev said.

Tsar Boris III had given his consent to the deportation of the Jews from the “new lands” and the inclusion of 8500 Jews from the country’s pre-Second World War borders in the total number of Jews destined for deportation, he said.

Associate Professor Christidi noted that in 2018, Bulgaria had become a full member of the International Holocaust Remembrance Alliance, an intergovernmental organisation which provides political and public support for education, commemoration and research on Holocaust issues at national and international level. Bulgaria was obliged to fulfil the commitments it undertook as a full member.

The path to full membership had been a difficult one and “Bulgaria had to constantly explain where there are such individuals who try to deny obvious facts,” she said.

As a historian, she denounced “quite ridiculous accusations and extremely unacceptable statements by people who do not know, or do not want to know, or to rely on the historical facts”.

“I also remind you that the Holocaust is a set of many measures against the Jews, and their physical destruction is only the final phase.”

Nor could there any doubt that what happened in the camps was slave labour – a reference to the dissenting claim that the camps were used to “hide” Bulgarian Jews from the Nazis.

Another fact about which there was no dispute among academics was that Bulgaria had signed a treaty for the deportation of the Jews, and the Bulgarian authorities, the Bulgarian government and the Tsar bore absolute responsibility for this.

“It does not matter whether Tsar Boris was an antisemite or not.” There was no doubt that Bulgaria had been prepared to proceed to the deportation of the Jews from the old borders of the kingdom.

“So, beyond all doubt, there were basic elements of the Holocaust in Bulgaria. Thank goodness, it did not reach the extremes it did in other countries.”

Poppetrov said that the state had expelled masses of people from their homes. “And what was the motive? The ‘security of the state’. Could 50 000 Jews become partisans and spies?” he said, adding that the Defence of the Nation Act had been adopted before Germany and the Soviet Union were at war.

He challenged the notion that all these steps had been taken under pressure from Germany, and that Bulgaria’s rulers of the time did not know what was happening to the Jews. It was true that Auschwitz was liberated in January 1945, but already in 1942 there had been newspaper reports about the mass murder of Jews in Europe.

Dr Oscar poured scorn by claims by some that “the whole Bulgarian people, the tsar, the government, all came to together to rescue the Bulgarian Jews”. (Shalom’s policy is to acknowledge the role of the Bulgarian Orthodox Church, civil society, some politicians and ordinary people in the rescue; while Filov was a known antisemite and the agreement on the deportations was signed at intergovernmental level.)

“I would not be surprised if some pseudo-papers emerge in the foreseeable future to outline the ‘incredible role’ of the Bulgarian government, in the form of Bogdan Filov, perhaps Alexander Belev (who headed the Jewish Commissariat and signed the agreement on the deportations) in defence of the Bulgarian Jews,” Dr Oscar said.

He said that over the years, General Lukov had been “repackaged” as a patriot, advocate, protector of the Bulgarian Jews. “He opposed any anti-Jewish policy in Bulgaria,” Dr Oscar said with contempt at the notion. Lukov, in whose honour a torchlit parade, organised by far-right groupings and attended by neo-Nazis from elsewhere in Europe, is held annually in Sofia, was head of the pro-Nazi Legionnaires before his 1943 assassination.

Distortion of the facts diminished the real value of the real rescuers, Dr Oscar said. “Ordinary people who sacrificed their welfare, even their own lives, to help the suffering Jews.”

“As a citizen, I believe in the European future of Bulgaria. It is our duty to bring these democratic values to life and to struggle in every way against attempts to divert our country from this European path.

“Every attempt to rewrite this history is an attempt to change these values in Bulgaria,” he said. 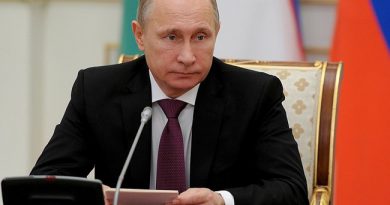 Russia is not Charlie

Patriotic Front’s price for participation in GERB coalition: freezing the price of electricity