A total of more than 6.3 million Bulgarians are eligible to vote in the May 26 2019 European Parliament elections, to choose the country’s 17 MEPs.

Bulgaria is one of 21 European Union countries holding European Parliament elections on May 26, the final day of an election period that began on May 23 with MEP elections in the UK and the Netherlands.

In Bulgaria, 13 political parties, eight coalitions and six independent candidates are standing in the MEP elections.

There will be 11 661 polling stations in Bulgaria. Voting will be possible in medical establishments, retirement homes or other social service institutions, vessels under the Bulgarian flag, and places of imprisonment, provided that at least 10 voters have given notice of their intention to vote there no later than 48 hours before election day.

Polling stations open at 7am and close at 8pm. If there are voters still queueing at 8pm, the head of the regional election commission has leeway to allow voting to continue, but until no later than 9pm.

There will 191 polling stations in 64 countries outside Bulgaria.

There will be 24 polling stations each in the UK and in Germany, 16 in Spain and 10 in France.

The Central Election Commission said that even if they have not applied to vote outside the country, Bulgarian citizens abroad can exercise their voting rights in the European Parliament elections at polling stations abroad by showing an official identity card and filling out a declaration. However, one of the conditions is that they have had a registered address at a permanent and current address in Bulgaria or another country of the European Union in the past three months.

A total of 8671 Bulgarians met the April 30 deadline to declare their intention to vote in a polling station in a foreign country.

On the day before the elections, polling stations were being sealed and handed over to police for guarding ahead of the opening of voting.

The results of exit polls may only be published after voting in Bulgaria ends. In recent elections, however, some media have used a loophole in the law to post exit poll results on social networks while voting is still proceeding.

While there is no fixed threshold for winning an MEP seat, the workings of the formula used effectively mean that a 5.88 per cent share is required.

Voting is by paper ballot and, for the first time, the law is allowing the use of 3000 touch-screen voting machines.

The weather forecast for Bulgaria for May 26 said that it would be mostly sunny, with a light north-west wind in the morning and maximum temperatures ranging between 24 and 29 degrees Celsius.

At the Black Sea, it would be mostly sunny, with some cloudiness gathering in the afternoon, and maximum temperatures between 22 and 26.

May 26 is also the close of a three-day long weekend following the public holiday on Friday, which is expected to result in heavy traffic on major roads. The Road Infrastructure Agency said that to ease car traffic, the movement of lorries of more than 12 tons on motorways and Bulgaria’s busiest roads would be banned between noon and 8pm. On the Trakiya and Hemus motorways, there would be two lanes in the direction of Sofia and one in the direction of Bourgas or Varna, the Road Infrastructure Agency said. 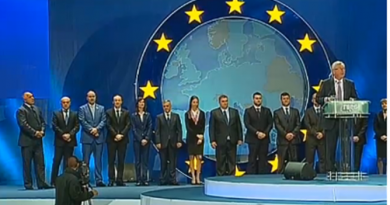