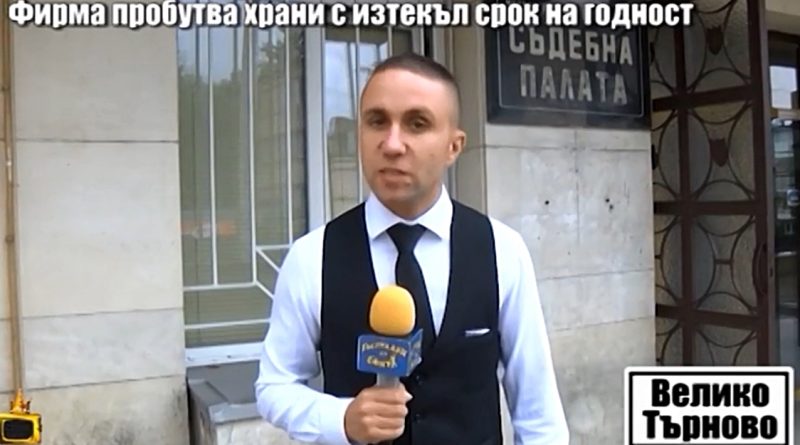 Two people have been arrested after a Bulgarian television journalist was assaulted at a warehouse in Veliko Turnovo while he and a cameraman were filming a story about the re-labelling and re-sale of expired foods.

The two assailants would remain in custody for 24 hours pending investigations, police senior commissioner Dimitar Masov told Nova Televizia. It was not clear what had happened regarding a third assailant.

Dimitar Vurbanov, of the satirical and investigative television show Gospodari na Efira (“Lords of the Airwaves”) told Bulgarian National Television on September 27 that he was in fair condition, with some pain. His hands and head were slightly injured in the assault.

Vurbanov said that he and the cameraman had gone to the warehouse where they knew that expired goods were stored and which was continuing to operate, with food still reaching the market, in spite of several inspections by police and Bulgaria’s Food Safety Agency.

“We wanted to ask warehouse manager Ivan Ivanov whether he was above the law, and then there was aggression against me and the cameraman,” Vurbanov said.

This is the second time that Vurbanov has been assaulted while working on a story. In 2010, he was hit on the head with a hammer while working a story.

The Association of European Journalists – Bulgaria strongly condemned the assault. It noted that as early as June 2018, he had alerted the district directorate of the Bulgarian Food Safety Agency, the police economic crimes squad and the Prosecutor’s Office about the irregularities that he had uncovered.

“Since then, there has been no adequate and visible response from the institutions, although it is clear from the circumstances that the journalist has defended the public interest by alerting about a practice dangerous to society,” the association said.

“This is another case when, in a journalistic investigation, the only consequences are not for the alleged offenders, but for the investigative journalists themselves,” it said.

Speaking in New York, where he is attending the opening sessions of the UN General Assembly, Bulgarian Prime Minister Boiko Borissov said that he had told police to keep him informed of progress in the investigation.

Borissov said that he hoped that prosecutors would be able to press charges quickly. “Such a thing cannot be tolerated. We must be extremely irreconcilable with such actions,” he said.

In April 2018, Bulgaria again fell in Reporters Without Borders’ annual World Press Freedom Index, to the lowest ranking among European Union countries and lower in the index than all the countries of the Western Balkans.

Physical attacks and death threats against journalists by criminal groups are especially common in Bulgaria, Reporters Without Borders said, which moved the country down two places to 111th place in its index.