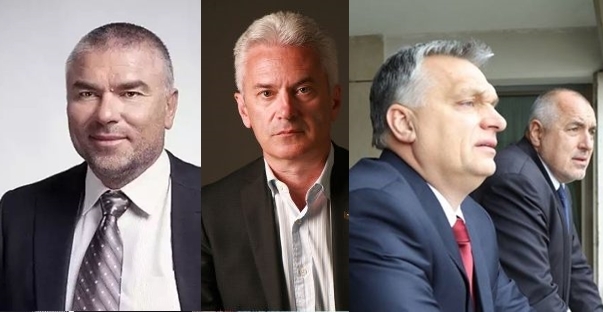 The leader of the far-right Ataka party, Volen Siderov, and of Parliament’s smallest party, Vesselin Mareshki, have tabled a resolution in Bulgaria’s Parliament that if approved would oblige Prime Minister Boiko Borissov to oppose EU sanctions against Hungary.

The measure to trigger Article 7 sanctions procedures had the necessary majority to pass, with 448 votes in favor of the motion, 197 against and 48 abstentions. The move means that Hungarian Prime Minister Viktor Orbán’s government could eventually lose its EU voting rights, DW said.

In the European Parliament vote, MEPs from Borissov’s GERB party and from VMRO, a constituent party of government minority partner the United Patriots, voted against the launch of a sanctions procedure against Hungary.

Of Bulgaria’s 17 MEPs, those who voted in favour of sanctions included socialist Sergei Stanishev, a former prime minister, and three Movement for Rights and Freedoms MEPs – Iskra Mihailova, Filiz Husmenova and Ilhan Kyuchuk. Svetoslav Malinov of the Democrats for a Strong Bulgaria, a member of the centre-right European People’s Party group, also voted in favour, the only Bulgarian MEP from the EPP group to do so.

If approved, the resolution tabled by Siderov and Mareshki would oblige Borissov to make a statement to the EU Council against the procedure that would withdraw Hungary’s vote in the EU.

The resolution’s motives describe Orbán as having “the courage to fight against misdirected liberalism and to defend his country”.

“The problem with the misguided policy of EU migrants has led to serious problems in the member states, problems that have been projected for years, this policy has threatened the stability and security of European citizens, the next leaders will have the difficult task of fixing the error but the damage has already been done and at the expense of human life,” the motives for the resolution said.

The draft resolution has 11 signatories, only from Siderov’s Ataka party and from Mareshki’s Volya party.

Speaking in the National Assembly on September 14, Siderov praised the GERB MEPs who voted against the European Parliament resolution. Hungary has set an example for the countries of Eastern Europe, he said.

“Viktor Orbán has done things that provide an example for other countries – how, within the framework of the EU and Nato, you can have a flexible policy. He has shown that there can be policy in the interests of citizens. Everyone should consider whether the time of non-system parties has come,” Siderov said.