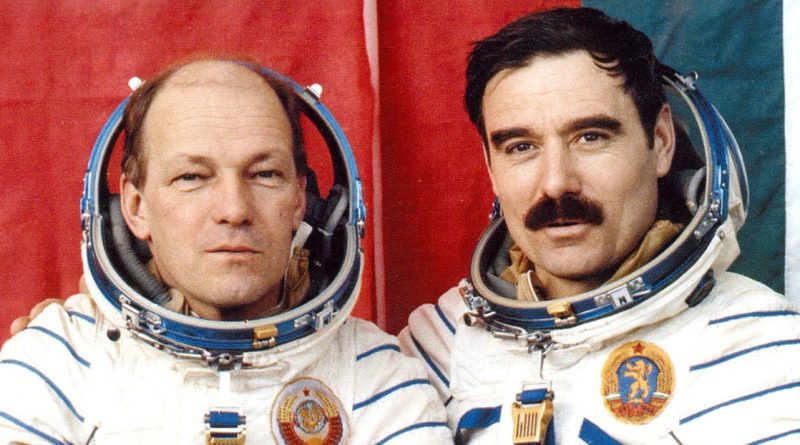 An April day in 1979 found Bulgaria’s first cosmonaut, Georgi Ivanov, high above the earth and facing a crisis quite as perilous as the American crew of Apollo 13 had nine years previously – almost to the day.

Ivanov’s participation in the Interkosmos programme, which paired Soviet cosmonauts with colleagues from other socialist countries (giving a new meaning to the term “communist fellow traveller”) had been intended as a propaganda triumph. Instead, breakdown of the Soyuz 33’s main engine just 1000m from the Soviet Salyut space station threatened to turn the episode into tragedy.

It would be up to the Soviet commander, Nikolay Rukavshnikov, and mission control at the Baikonur space station to save the lives of the two men in the cramped capsule.

By the time the drama was unfolding, the space race between the United States and the Soviets had been underway for more than 20 years. The way it was run saw differences in more than just the rival technologies.

Candidates for the Soviet programme, all other skills aside, were tested for political reliability. Even after the lengthy phases of training, including endurance tests, simulations of procedures from launch to docking with and working in the Salyut, landing and survival training in the Black Sea and wilderness areas, would-be cosmonauts were subject to final approval by the central committee of the Communist Party of the Soviet Union as to whether they flew or not.

As Michael J Sheehan related in The International Politics of Space, Soviet decisions were guided not just by their assessments of individuals but also by the Kremlin’s relations with countries.

Romania found itself in the queue behind non-Warsaw Pact countries such as Cuba and Mongolia because of Moscow’s disapproval of Romanian behaviour, for example its refusal to take part in the 1968 invasion of Czechoslovakia.

There is a cliché, perhaps appropriate here, that Bulgaria was the Soviet Union’s most loyal satellite. Its reward was the selection of six Bulgarian candidates for the Interkosmos programme, and of these six, Lovetch-born military pilot Ivanov won out.

For him, however, there was an individual sacrifice. His surname at birth, Kalakov, had to go because it sounded like a word that is rather rude in Russian.

That blown engine almost cost him an even greater sacrifice.

Given the closed nature of the Soviet programme, inevitably conspiracy theories and speculation arise.

In contrast to the Apollo 13 drama, an anxious nation was not kept abreast of developments; they knew nothing at all. Some authors suggest that even Ivanov himself did not understand the scale of the problem with which Rukavishnikov was wrestling, as he and the engineers on earth grappled to ensure the two cosmonauts’ survival.

Some accounts have the two cosmonauts, saved by the reserve engine (which in spite of fears, ignited and worked for the period required to propel the craft back to earth without blowing up the main engine), near-death when they were rescued. Other tales, more glorious, speak of their heroism and do not fail to point out that Ivanov’s heart rate and blood pressure were the lowest recorded among any cosmonaut in that final hurtle back to earth.

There are scurrilous tales, too, written on the internet in the Bulgarian language, alleging that the Russian commander was nipping brandy while aloft. There is another tale that a newspaper editor faced considerable wrath for publishing a story, that had been prepared in advance, extolling the achievement of the docking with Salyut. Strangely, the story goes that the editor’s judgment was diminished by alcohol.

The trip was just more than a day, ending on April 12, the Day of the Cosmonaut – the anniversary of the Yurii Gagarin flight – instead of lasting the seven days that was the allotted span of all such Interkosmos trips.

Not all was lost. Bulgaria could at least boast that the scientific programme for the flight had been designed by Bulgarian scientists and another batch of Bulgarian equipment had made it into space, after the first was launched seven years earlier. For the record, the foreshortened Ivanov mission had been to use the Bulgarian scientific equipment to study the ionosphere-magnetosphere interactions and for remote sensing of the Earth.

The Soviets decided to award Sofia a consolation prize, which was a trip to the Mir space station in 1988 for a Bulgarian cosmonaut. Ivanov never returned to space.

We come in peace

The Soviets pointedly named their newest space station Mir (“peace”) in an apparent signal that this was Moscow’s great mission, in contrast to their allegation that the US of the Reagan era intended the militarisation of the cosmos through the Star Wars programme.

On June 7 1988, a Soyuz TM-5 launched on its way to Mir, on board Alexsandr Alexandrov, a 37-year-old Bulgarian air force lieutenant-colonel from Omurtag. One of a crew of three, he was designated a research engineer, the customary title given to Interkosmos cosmonauts.

In a nod to an iconic moment in Bulgarian-Russian relations, the Alexandrov flight was named Shipka, a reference to the peak where Russian and Bulgarian forces won a crucial victory against the Ottoman army in a major step towards Bulgaria’s liberation.

The Soviet Union of 1988 had its differences from that of 1979. Brezhnev was gone and Mikhail Gorbachev was in power. There was a relative openness; the launch and return were broadcast on CNN.

In line with time-honoured practice on both sides during the Cold War, there was the obligatory chat with the head of government, and so viewers of Bulgarian National Television were treated to the sight and sound of long-time dictator Todor Zhivkov, in a hall of the National Palace of Culture, NDK, made up with logos and slogans lauding cosmonauts and communisms, in stilted conversation with his compatriot far above. Zhivkov, whose conversation ran to banalities at best, sits in the expansive hall (which in this guise is somehow reminiscent of Mussolini’s Mappamundo, sans the restrained good taste); Alexandrov stands with his comrades aboard the Soyuz. There is a forced jollity, a patriotic reference to the “space food” manufactured in Bulgaria, an assurance – in response to a question from Bai Tosho – that “everything is calm, Comrade Zhivkov”. The forced jollity is especially unnerving. All Zhivkov, clad in an ill-fitting sky-blue suit, lacks is a fluffy white cat. (Part of the video can be found on the internet, by searching on “Тодор Живков космонавти”.)

On June 17, the two Soviet crew, Anatoly Solovyev and Viktor Savinykh, and Alexandrov landed, mission accomplished. Bulgarian-made equipment was placed on the Mir space station. According to official records, the Alexandrov mission saw 49 scientific experiments, in the fields of space physics, remote sensing, biology, medicine and materials found in space.

Ivanov went on to membership of Parliament and of the Grand National Assembly that drafted Bulgaria’s 1991 post-communist constitution. He went boldly into the private sector, with ownership of Air Sofia, and of the golf course at Ihtiman and has turned out for occasional public appearances. With Alexandrov, Ivanov was a guest of honour at a premiere in Sofia of the Imax film about the International Space Station.

Alexandrov went on to become Deputy Director of the Institute of Space Research at the Bulgarian Academy of Sciences.

A name that would return to prominence many years later was that of Luchezar Filipov, who had a prominent role in the Alexandrov mission; Filipov, now a researcher with the Bulgarian Academy of Science who studies black holes and the origins of the universe, made headlines in November 2009 because of his involvement in the Dialogue 2010 experiment, attempts to communicate with aliens.

Bulgaria’s involvement with space, as noted, did not begin and end with its two cosmonauts. According to the Bulgarian Academy of Science, the country has been involved in more than 300 experiments in space. Devices that Bulgarian scientists have come up with, according to a report by Bulgarian National Radio, include equipment for measuring the health indicators of cosmonauts under extreme conditions, as well as for research work on everything from plant cultivation to a satellite intended to monitor natural disasters, water and air pollution.

More symbolically, while the communist-era practice of placing a series of photographs of Soviet cosmonauts for hero-worship in schools has faded away, Bulgaria’s Black Sea city of Varna still boasts a “Cosmonaut’s Avenue”.