Bulgaria’s National Assembly passed amendments to the country’s Fuels Act at second reading on July 12, despite strong opposition from small fuel retailers and warnings of a possible EU infringement procedure.

The bill sets a number of higher financial requirements for fuel retailers – including their equity and bank guarantees against future lawsuits, as well as stipulating higher fines for breaking the law.

The stated goal of the amendments is to reduce fraud and tax evasion in the fuels retail sector, but small retailers, who operated several petrol stations at most, have argued that the changes would impose an impossible financial burden and thus favoured the large companies dominating the sector, who would have no problem meeting the financial obligations and stood to gain from small retailers shutting down.

Tabled earlier this year, the bill passed despite several parliamentary committees refusing to endorse it. The Finance Ministry, in a critical position published earlier this month, warned that it could prompt an infringement procedure from the European Commission due to the lack of prior notification, as required by EU rules, and the concerns that the bill’s provisions could harm competition.

MP Emil Dimitrov, one of the bill’s authors and a former head of Bulgaria’s Customs Agency, has rejected the criticism regarding the lack of prior notification to the EC, saying that the law was slated to go into effect six months after publication in the State Gazette, which was enough time for the Economy Ministry to give notification to the European Commission.

This longer period was due to the fact that all retailers would have to apply for new operational permits, with the Economy Ministry given three months to draft the requisite regulations on the exact procedures for applying and receiving the permit.

The amendments caused disagreements within the United Patriots group of three nationalist parties, the junior partner in Bulgaria’s ruling coalition. Dimitrov is an MP for one of those parties, but his bill came under attack from United Patriots co-leader Valeri Simeonov (who leads another of those parties), who described it as “lobbyist” and favouring big retailers like Russia’s Lukoil.

Simeonov compared the amendments to “cutting one’s arm to deal with a gangrenous finger” and said that it would harm small businesses. He said that his party planned to lodge a complaint with the European Commission. 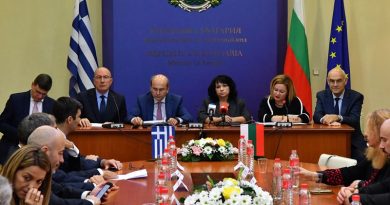