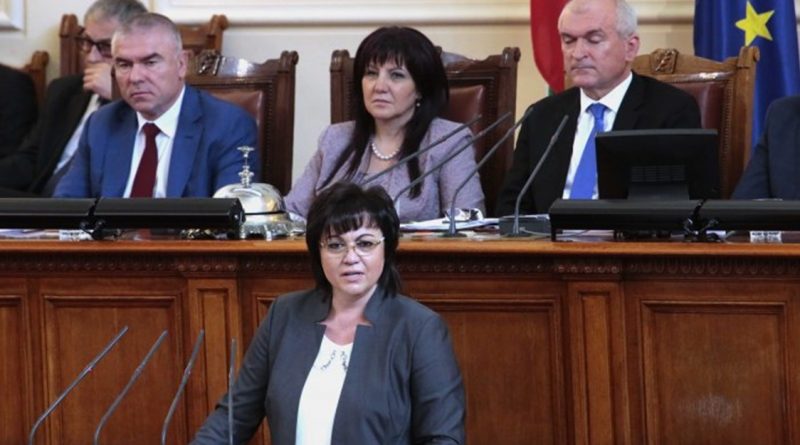 The Bulgarian Socialist Party, which is seeking the ouster of Speaker Dimitar Glavchev, said on November 16 that it was starting a boycott of sittings of Parliament.

However, it is not a full boycott. BSP leader Kornelia Ninova said that the party would be in the House for three items – their motion of no confidence in Prime Minister Boiko Borissov’s government, their planned motion calling for the resignation of Glavchev, and the pending second-reading vote on Budget Act 2018, which already has been approved at first reading.

She said that the “boycott” would continue until Glavchev’s resignation.

Ninova said that the BSP had collected 88 signatures of MPs for the petition for the dismissal of Glavchev. The BSP has 80 MPs in the 240-member Bulgarian National Assembly.

The BSP’s current campaign against Glavchev, a senior member of Borissov’s centre-right GERB party, began after he expelled Ninova and the BSP’s Anton Koutev from the November 15 sitting.

Ninova had been reading a declaration demanding that Borissov be asked to come to the National Assembly to explain his recent statement that there were members of Parliament involved in drug trafficking.

Glavchev expelled her for what he called insulting comments about the National Assembly and about Borissov. Koutev was suspended from two sitting for breaching parliamentary decorum, as BSP MPs banged on their desks and chanted “resign!”. Following this morning melodrama, BSP MPs walked out. Soon after, minority party the Movement for Rights and Freedoms walked out too.

On November 16, GERB MP Tsveta Karayancheva, a Deputy Speaker, told reporters: “You see that Parliament is working without them (the BSP)”.

Karayancheva said that the BSP wanted to provoke scandals constantly, to distract from the achievements of the government, such as the November 15 Cooperation and Verification Mechanism report from the European Commission, and the additional payment being given to pensioners ahead of the Festive Season.

On the morning of November 16, it took three attempts to confirm a quorum for the day’s sitting to begin.

The vote on the proposal that Glavchev resigns is expected on November 17. The two parliamentary groups in the ruling majority, GERB and the United Patriots, have sufficient votes to defeat it. The National Assembly’s smallest party, Vesselin Mareshki’s 12-MP Volya, also will not support the motion.

The motion of no confidence in Borissov’s Cabinet is similarly doomed by the numbers. In turn, the second-reading vote on the Budget for 2018 is also expected to be approved.