Britain is my native country. I was born and bred here, but I was living and working for some years in Bulgaria, my second home. My Bulgarian wife and I came back to England seven years ago, driven by the educational needs of our young daughter and the economic chaos after the collapse of 2008. My wife assists, not only with the Bulgarian Society in Norwich, but also runs another organisation, UKI Centre, which assists Bulgarians mainly, with their settlement problems.

Many Bulgarians and other East Europeans are driven here with a similar agenda,” looking for a better life”. Generally life is not quite as they imagined, but judged by many, to still be better than the life in their own country. However, many of them are just modern day slaves, being given low-paid work when it suits their employers and having it withdrawn at a moment’s notice. Perhaps these people prefer modern day slavery to the modern day poverty which now exists in Bulgaria?

The truth about life here is for those without well paid skills, one of hard work and drudgery. ”The system is built on the exploitation of cheap labour, mostly migrant, a system that has been socially disruptive and politically fraught. Migrant labour is perfect for the just-in-time model, which needs the extreme flexibility of a class of desperate workers to function. Low-paid migrants, predominantly from Eastern Europe, have become the backbone of the UK’s centralised distribution centres, providing 35% of food manufacturing labour, and 70-80% of harvesting labour”.

The migrants arrive here full of hope, to first discover that it’s extremely difficult to find accommodation and schooling for their children. Rents are very high and landlord renting conditions very strict. Many people are forced to live in small communes sharing houses and rooms, many of these hardly fit for modern living. Without a proper address its difficult to even open a bank account, or get the necessary NI workers card, proving that you are registered in the system for tax payments etc. It is not possible to find legal work without an NI card.

In order to find work, most have to register with and work for an employment agency on the basis that if work is available you can work, if not hard luck, try another day. Others do difficult courier jobs, clean cars, gardening, clean houses, anything to keep their heads above water. Currently, once you are registered and have worked and paid taxes, it may be possible to claim government social benefits but this system may soon be changed. Many migrants are aware of these benefits and, of course make it their aim to receive them, as they are often more than the amount that they could receive for actually working in their home country.

The EU’s intransigence is surely to blame for this mass movement of people, draining their home countries of both labour and talent, instead of developing their economies and opening new opportunities and production facilities. They have treated the new members of Eastern and Southern Europe as consumers, an extension to their own markets. This coupled with unregulated free movement of people has caused a seismic shift in population leaving many of these countries without the labour and the educated and talented people they need if they are to ever progress. This has allowed more scope for doubtful businessmen and inept politicians who are in business or politics for their personal gains, not with any will to provide good well paid work, to improve their country for the good of all. Surely a short sighted policy.

And what of the future in the UK ? Well the future after Brexit is not at all clear yet. It seems certain, that although there won’t be any mass deportation of EU citizens, it will become more difficult, especially for low paid workers with no fixed job. Indeed we are already seeing a tightening of the application procedures for the necessary documents to live and work in the U.K. For those with full time skilled work there shouldn’t be any any problem, as the EU and Britain will surely make a reciprocal agreement for their citizens, including Brits spread across the EU.

We could well see the re-introduction of the ”Brigade type employment” for new seasonal workers, paid, but without access to social benefits apart from the health service and the workers will have to return to their home country when their contracts finish. However, I believe that the situation will become much clearer soon now the U.K government has invoked article 50, for leaving the EU. So for now the modern day slavery continues. 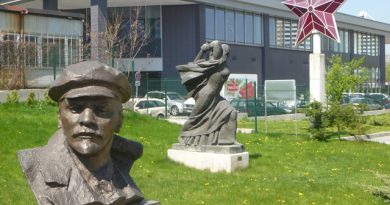