The European Commission’s spring forecast for the EU economy, released on May 11, estimated that Bulgaria’s economy would continue growing strongly in 2017, re-affirming its 2.9 per cent growth target.

This would follow “robust growth” of 3.4 per cent in 2016, which exceeded EC’s last growth forecast (repeatedly revised upward over the course of last year, from an initial 1.9 per cent) by 0.1 percentage points. The EC also forecast 2.8 per cent growth for Bulgaria in 2018.

Bulgaria’s economic growth in 2016 was due to “buoyant” net exports and private consumption, which offset a four per cent decline in investment. This year’s growth is once again expected to be driven by domestic demand, while investment is expected to grow following the acceleration in EU funds absorption under the 2014-2020 EU programming period.

Other trends forecast by the EC for the Bulgarian economy included a decline in its current account surplus, from 4.2 per cent of GDP last year to 2.4 per cent in 2017 and 1.8 per cent next year; inflation turning positive to reverse the deflationary trend in place since 2013; and a small Budget deficit of 0.4 per cent of GDP in 2017, following last year’s balanced budget.

For the EU as a whole, the Commission forecast economic growth in 2017 at 1.9 per cent, up from 1.8 per cent in the winter forecast released in February. The euro zone, meanwhile, is expected to grow by 1.7 per cent this year, an increase of 0.1 percentage points compared to the previous estimate.

“Europe is entering its fifth consecutive year of growth, supported by accommodative monetary policies, robust business and consumer confidence and improving world trade. It is good news too that the high uncertainty that has characterised the past twelve months may be starting to ease,” economic and financial affairs commissioner Pierre Moscovici said in a statement.

The risks to the outlook had become more balanced compared to the winter forecast and included “future US economic and trade policy and broader geopolitical tensions, China’s economic adjustment, the health of the banking sector in Europe and the upcoming negotiations with the UK on the country’s exit from the EU.” 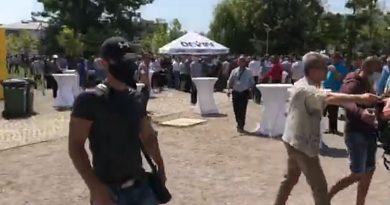