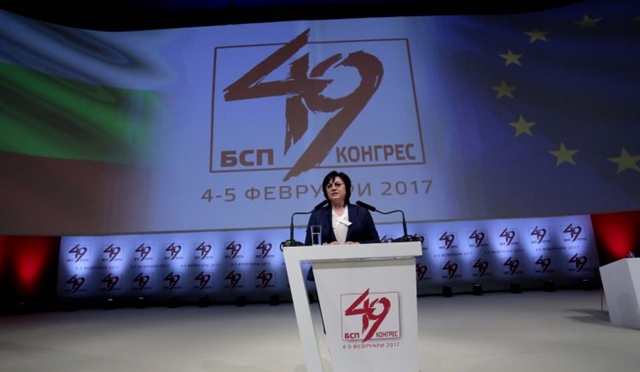 At a two-day congress, the Bulgarian Socialist Party adopted rule changes including limiting its MPs to no more than 12 years – three full terms – as well as direct elections of the leader by party members and also limiting the leader to two terms.

The February 4 and 5 congress, held at the National Palace of Culture in Sofia, saw Kornelia Ninova, elected as party leader in May 2016, consolidating her grip on the party ahead of Bulgaria’s March 2017 early parliamentary elections.

Among those who would be ineligible for nomination as an MP is her predecessor as party leader, Mihail Mikov. Others who would not be able to return include party veterans Yanaki Stoilov and Atanas Merdzhanov.

The term limit for BSP MPs was overwhelmingly accepted by the congress, by 532 to 50 votes.

For the purpose of the March parliamentary elections, the party decided it would stand under a coalition banner entitled “BSP for Bulgaria”.

This is its latest re-branding. For more than a decade, it dubbed the BSP-led parliamentary group and elections coalition “Coalition for Bulgaria”, which was dropped in recent years after a string of electoral defeats. After the October 2014 parliamentary elections, the BSP called its group “BSP Left Bulgaria” (in the sense of left-wing, not of emigration, though detractors of the party probably would prefer the latter interpretation).

The congress supported the idea that the “Coalition for Bulgaria” coalition should involve partners that could contribute to the overall election result and that have the influence to achieve electoral support, as a BSP statement put it. A further criteria is that partners with which the BSP has “traditional relations” and that would participate with joint lists in all types of elections.

Agreements with partners will follow a few basic principles, including expulsion and sanctions for disloyalty to the members of the coalition.

The congress authorised Ninova to negotiate an election coalition.

The BSP’s election platform includes doubling the resources of the fund for the treatment abroad of children with disabilities and simplifying the procedures for awarding funds.

The platform also includes the goal of achieving real economic growth of no less than 12 per cent at the end of four years (constitutionally, the term of office of a National Assembly). It also envisages state support for Bulgarian culture and art.

Other planks are “observance of the constitutional rights and freedoms of citizens”.

BSP congress delegates also rejected “substitution” of Bulgarian history (a term essentially meaning that they are against what they would see as alternative facts in Bulgarian history), the rehabilitation of fascism and denial of the “achievements of the socialist period in Bulgaria”.

They promise a 15 per cent increase in teachers’ salaries in the first year of a BSP government – teachers’ salaries being a popular topic in this year’s elections; centre-right rivals GERB have promised doubling them over four years.

Opening the congress on February 4, Ninova told the congress that “change is a must” and depicted Bulgarians as, according to the party’s own internal research, funding a “parallel state” through out-of-pocket informal costs, such as bribes and paying prices inflated by cartels and monopolies.

Ninova also seized on the November 2016 victory in the presidential elections of Roumen Radev and Iliyana Yotova as ushering in this change.

The BSP’s leadership has been bullish since the victory of the Radev-Yotova ticket, which the party backed, while the candidacy nominally was based on an initiative committee. The BSP victory in November was its first decisive victory since 2001, when its then-leader, Georgi Purvanov, won that year’s Bulgarian presidential elections.

Support for the Radev ticket far exceeded votes for the BSP in any recent parliamentary or municipal elections, hence the party’s newfound confidence.

In 2016, polls showed public support for the party as having increased since Ninova became leader.

Currently, various polls show a tight race for top spots in the March 2017 elections between Boiko Borissov’s GERB and Ninova’s BSP. The early parliamentary elections were prompted by Borissov resigning as prime minister after Radev won the presidential elections.