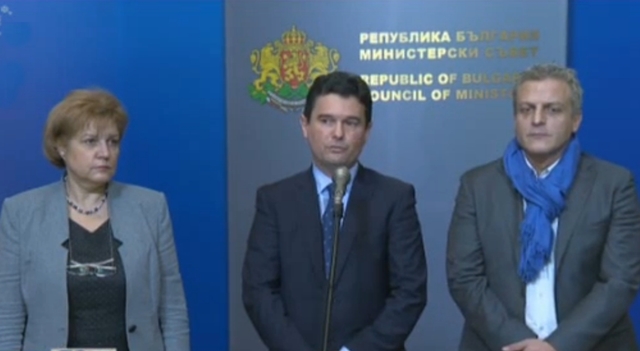 Bulgaria’s centre-right Reformist Bloc coalition held talks with Boiko Borissov’s GERB party on December 6 to assess whether the bloc should accept a mandate to try to form a government – but the talks produced only agreement to talk again if the bloc is offered a mandate.

GERB also has refused a mandate from President Rossen Plevneliev to seek to form a government, now that Borissov has resigned as Prime Minister.

Plevneliev will on December 7 offer a mandate to Parliament’s next-largest party, the Bulgarian Socialist Party. The BSP will turn it down.

That leaves Plevneliev with a free hand to decide to which parliamentary group to offer a mandate. He has indicated that it is most likely that he will offer it to the Reformist Bloc.

The bloc decided to embark on talks with a selection of other parliamentary groups to assess the feasibility of trying to form a government. It has excluded talking to the BSP, the Movement for Rights and Freedoms and the MPs that are members of DOST, Lyutvi Mestan’s party that is an MRF breakaway. The bloc does not want a return to power of the BSP and MRF.

The bloc has indicated that it would prefer to try to put together a cabinet that does not include party political leaders.

GERB’s Menda Stoyanova met a Reformist Bloc delegation of leaders on December 6, while Borissov is reported to have joined in the talks.

The talks appear to have produced little more than an agreement to talk again if, as expected, Plevneliev offers an exploratory mandate to the Reformist Bloc.

Stoyanova, speaking after the talks, said that it was not serious to talk about forming an “expert” government (in the way that the 2013/14 administration in which Plamen Oresharski sat in the prime minister’s chair was purported to have been an “expert” cabinet) because such a scenario would involve many behind-the-scenes deals.