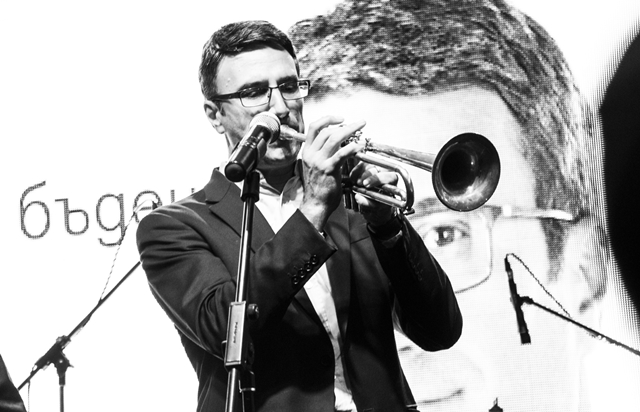 The big takeaway from the past week in the campaigns ahead of Bulgaria’s November 2016 presidential elections is that we now know that Traicho Traikov plays the trumpet rather well.

On stage in Plovdiv, Traikov joined jazz fusion masters Akaga, and let rip with a lively rendition of When The Saints Go Marching In (not a concept one might automatically associate with Bulgaria’s 21 presidential candidates).

The Reformist Bloc’s presidential candidate is not alone among Bulgarian politicians in having some musical talent, though. 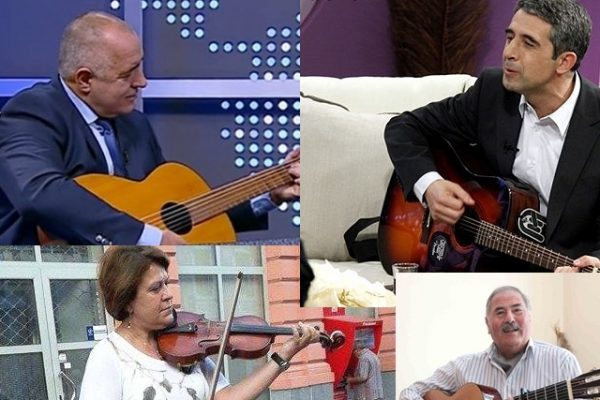 To varying degrees of proficiency, other Bulgarian politicians who have appeared in public wielding a guitar include Prime Minister Boiko Borissov, four-time presidential candidate George Ganchev, and incumbent President Rossen Plevneliev. The Movement 21-NMSP presidential candidate, Tatyana Doncheva, is quite the virtuoso on the violin.

A check on the CVs and public appearances of others among the presidential candidates did not establish anyone apart from Traikov, Ganchev and Doncheva with musical skills, though there is a certain degree of fascination among some Bulgarians with a YouTube video of GERB presidential candidate Tsetska Tsacheva, some years ago, performing at the microphone, or if you prefer, singing.

It did not become clear whether the main rival of Tsacheva – who leads in the polls – Roumen Radev, sings or plays an instrument, but it has to be supposed that Radev, in being able to fly a fighter jet, has a skill that is not quite everyday, though perhaps not one to trot out late at night at parties.

That digression into musical matters aside, the past week saw the continuing theme of this being a presidential election contest in search of an issue.

If there are any issues over which this election is being fought, two stand out. One is illegal migration, and the other is using the presidential election as effectively a referendum on Borissov’s government.

Candidates to the left and right of GERB are hammering the illegal migration issue – the BSP’s Radev, ABC’s Ivailo Kalfin, Movement 21’s Doncheva, though with all these three there are nuances in what they see as solutions (not that the President is in charge of resolving the matter, but irrelevance is never something to hold back any Bulgarian politician from exploiting an issue); and, unsurprisingly, illegal migration is the signature issue for Krassimir Karakachanov, presidential candidate on a joint Patriotic Front-Ataka-VMRO ticket.

In town hall meetings in various cities and towns in the past week, Karakachanov called for borders closed against migration, adding that police should not need to be at the borders to protect against illegal migration, but in the villages and other small settlements countering petty crime (which characteristically for Karakachanov and his far-right ilk, he blamed on Roma people).

Karakachanov, going by the results of an Alpha Research poll announced on October 17, is running third in these presidential elections, albeit a bit distantly, at 8.7 per cent. He has, after all, a guaranteed electorate given the unified ultra-nationalist ticket. His insistence on talking incessantly about illegal migration may also go some way to explaining why others from opposition parties also are talking about it – partly to stop Karakachanov owning the issue, partly because they see Borissov’s government as vulnerable on the issue.

Radev, technically the nominee of an “initiative committee” but really the candidate of the opposition Bulgarian Socialist Party, told a meeting in Kazanluk this week that the migrant wave was on the rise, and added that he did not accept the policy of resettlement of refugees. 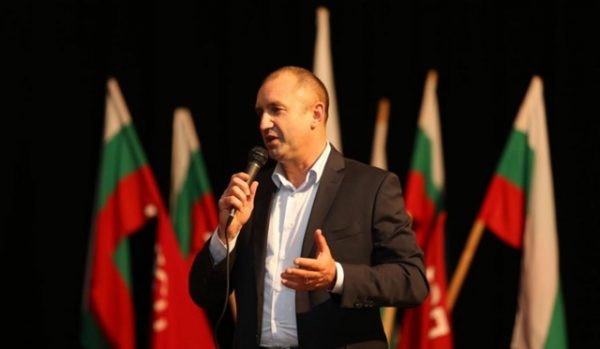 Citing data from recent weeks (fact-check: Radev is not incorrect), he said that the numbers of people crossing into the country illegally in recent weeks had increased.

Radev said that, visiting Sofia, he had found there were places where people were deeply worried because of the presence of migrants, and accused the government of a policy of “secretly looking for former military barracks” to build refugee camps (the government has denied this).

He said that the 160 million euro coming from the EU to assist Bulgaria secure its borders included “serious sums” for caring for migrants, for building of new centres and if to this was added a Cabinet decision about settlements in municipalities, “then we are faced with a serious problem”.

As he did in his October 20 live television debate against Tsacheva, Radev slammed the government’s performance on the fence at the border with Turkey, and said that illegal trafficking of migrants was “flourishing”, asking “why is the state silent and doing nothing about illegal trafficking?”

As soon as possible, the possibility of migrating illegally into Bulgaria should be cut off, and those who are in the country should be extracted and returned to their countries, Radev said.

GERB candidate Tsacheva, meanwhile, is continuing to run on the record of Borissov’s GERB government, as well as repeating all the predictable platitudes about promising to be a president who will be the unifier of the nation.

In Varna on October 22, Tsacheva chose “stability”, and Bulgaria’s need for it, as her theme.

Tsacheva cited the 2013/14 time of the BSP-Movement for Rights and Freedoms government as time wasted for Bulgaria, saying “we all remember the fenced-off Parliament during the ‘Oresharski’ cabinet” and how the gendarmerie had to protect MPs. 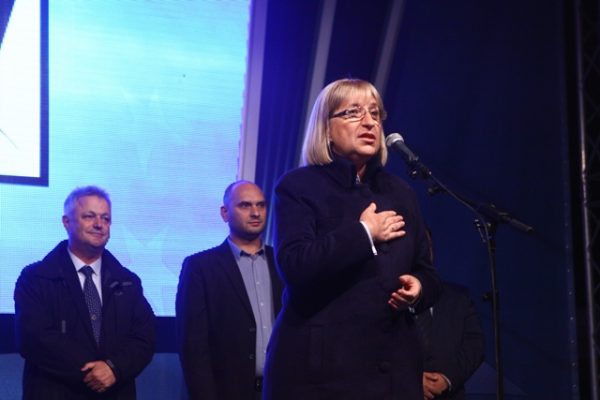 “Bulgarian citizens need stability – stability that we have now in the form of Prime Minister Boiko Borissov and GERB,” Tsacheva said.

As President, she said, she would “encourage the continuation of reform of the judiciary”.

Tsacheva told her Varna audience: “I deeply believe that all ethnicities and faiths should live together because we are all Bulgarian people”. She said that she that believes in dialogue, because only through dialogue can important decisions for Bulgaria be achieved, and the country continue to have a positive outlook among European partners.

“We have campaigned face to face with Bulgarian citizens in all settlements. I speak to you with my heart, without the election campaign team having put talking points in my mouth, that I have never spoken about before, unlike other candidates for president of Bulgaria are doing,” Tsacheva said.

A reference to the “heart” may have loaded meaning in Bulgaria’s election campaign. In her live television debate against Radev, Tsacheva recited the shaggy dog story about how, if you are not a socialist at 20, you have no heart, but if you are still a socialist at 40, you have no brain. After the debate, this elicited a demand for an apology from BSP leader Kornelia Ninova (who, by the way, is 47).

The week also saw the unsurprising announcement by the MRF, who did not formally nominate a presidential candidate, that it was endorsing Plamen Oresharski. The MRF paid for TV time showing Oresharski being feted at a party rally in the MRF heartland of Kurdzhali. The only interesting thing about this footnote is what effect the MRF endorsement will have on Oresharski, who in the Alpha Research poll placed 10th, with 0.5 per cent support. The same poll found MRF voters undecided or considering the “I don’t support anyone” option. The endorsement will no doubt get the MRF’s electorate into line behind Oresharski, though this is hardly likely to boost him much, and certainly not into contention with any of the five most-supported.

The fifth of those five is Traikov, who – when not showing his trumpeting skills – has been continuing to insist that Tsacheva and Radev are hardly alternatives to each other, and it is solely the Reformist Bloc presidential ticket that he heads that has the “strength to be free”, in the words of the bloc’s campaign slogan.

Finally, this past week saw the National Assembly approving the first reading of the last-minute emergency changes to the Electoral Code, including changing the previous version of the law so that votes for the “I don’t support anyone” option will count towards the final results in majoritarian elections, for president and mayors. Bulgarians, therefore, will in part have the strength to be free of their politicians, whether they are the ones promising stability, promising to be a unifier, able to fly a MiG-29, play a musical instrument or who have nothing other to sell than rejection of refugees.