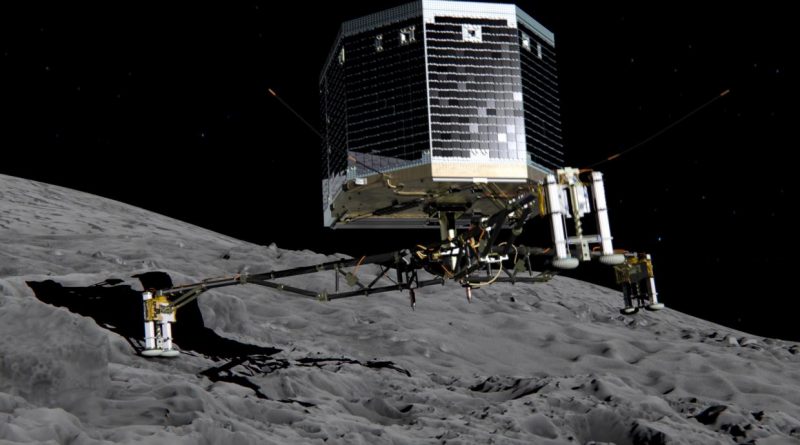 Just a day before Dr Matt Taylor, European Space Agency chief scientist on the Rosetta mission, speaks at the 2016 Sofia Science Festival, something more than 713 million km from Earth, the orbiter bearing the name of the mission will be going into an orbit of 10km around a comet that has much to tell us.

That orbit is measured 10km from the centre of the comet, meaning that Rosetta will be moving variously from eight to seven km from the surface on which the landing of Philea in November 2014 so thrilled the world of scientists, and the rest of us lay people who looked at the pictures and read the stories and tried to grasp the meaning of it all.

Matt, an astrophysicist who graduated from Imperial College London, points out that the stream of data emanating via the mission since it came out of hibernation in 2014 has been subject to continuing analysis since then.

“We already have hundreds of papers based on the data from the comment itself. We are already in the thick of it in terms of science, but the science will continue for decades after the mission finishes in September this year,” he tells The Sofia Globe.

More papers are being produced, following the process of analysis and review, and “a number of big results are coming out soon” – he demurs with a grin – “I am not able to tell you. And from more recent data as well”.

He admits being hard-pressed to say which of the data and findings coming out of the mission he finds most fascinating, noting that the Rosetta mission is broad-based in terms of the number of instruments it is carrying and the varied kinds of analysis being conducted.

Ultimately, he explains, the Rosetta mission is about studying comets for their place as the “leftover material” – he likens them to ingredients left unused after a cake is baked – from when the solar system was formed.

“By studying comets, we get an idea of what the solar system was like those many, many years ago, at some point about 4.6 billion years ago. The results we’ve got from Rosetta really are an eye-opener for me in this bigger picture.”

There is the issue of how the solar system was formed, what the conditions were like and whether there is a link between comets and asteroids and the development of planets such as Earth.

“We think that asteroids are highly likely to have delivered water to the Earth but it looks like comets also delivered some organic-like material as well, a kind of seeding.”

Recent data also suggests something about the age of the comet: “It’s a very old comet, it’s been in the outskirts of the solar system since the beginning, there are some indications that the material that the comet is made of predates the Sun.”

A gas spectrometer measures gases coming off the comet, and has been detecting various gases that give an indication of how the comet was formed, where it was formed and how long ago.

Measurements of, for instance, molecular oxygen from Rosetta could tell us something about the pre-solar cloud, the big cloud of gas and dust before the sun was formed.

Indications that there was a temperature different from that used in previous models have emerged.

“For the oxygen to be in existence still, the comet must have formed in a very cold region that would have led to this oxygen being trapped.” That, in turn, gives an idea of where the “cometary reservoir” – their place of origin – was. The measurements, he says, are changing views on earlier models of the evolution of the solar system.

Further, the scientists on the project have been looking at the way a comet forms.

“One of the big questions we had when we first saw the comet was, how did it get its shape? And we believe now, given the evidence, looking at how its layering is stratified within the comet, that is must have been made of two smaller comets, that had a soft collision. And that information is fed into models, to get an idea of how the solar system formed, way back when.”

Matt outlines theories about an earlier Earth and water. One of the main accepted ideas within the context of the evolution of the solar system was that Earth long ago was rather close to an early Sun. This would have that water would have been evaporated – boiled off – and something would have had to bring it back.

“The early Earth wasn’t a very hospitable planet, and then something must have brought things back to get us to where we are today.”

Pointing to the phase of hundreds of millions of years of the heavy bombardment of the inner solar system, when “leftover material” was orbiting the Sun and smashing into the inner planets, he says that the seeding theory is that this acted as a delivery mechanism to return volatile materials such as water and carbon dioxide to the Earth. (He does not fail to point out that another theory is that the Earth itself managed to retain water.)

There is evidence, Matt says, of organic materials – amino acids, the building blocks of DNA – and if asteroids and comets were impacting in the solar system, “probably more asteroids impacting the Earth than comets, but still comets impacting due to their orbit, and they could also have brought along the water, they could have build these building blocks of organic material, which could then go along and develop to be more complex molecules – that we are today”.

What has emerged and will still from the data may, he concedes, in the long-term possibly result in the improvement and rewriting of details in university textbooks, but adds that the process of sifting through all the data and subjecting the findings to peer review could means that these changes could take years.

An obvious question is what should come after Rosetta, in terms of follow-up missions, research, experiments and analysis.

Matt issues a reminder that Rosetta originally was supposed to be sample-and-return mission, that had been intended to descend to land on the planet, grab material and bring it back to Earth.

Given that that plan was shown to be technologically too challenging, the version of Rosetta that was used was adopted, of an orbiter with a lander in situ, analysing the surface.

“The next step from Rosetta would have to be sample-return but that still remains a massive challenging mission,” something, he says, perhaps decades in the future.

Just one reason why sample-return would be so challenging is that the material on the comet is in conditions about 200 degrees below freezing point “and we would need to maintain that material, bring it back to Earth while keeping it pristine throughout this process. That’s a very challenging possible mission for the future. For some people, it’s a pipe-dream”.

At the European Space Agency, he says, a new call has been issued, looking for input from the scientific community on proposing which missions should be undertaken.

– Dr Matt Taylor’s presentation on the Rosetta Mission at the 2016 Sofia Science Festival is on May 12 at 8.30pm on the main stage of Theatre Sofia.