The number of live births in Bulgaria in 2015 was lower than the previous year, with the country’s population continuing to decrease, as the mortality rate – the highest in the European Union – went up.

This emerges from an annual report by the National Statistical Institute (NSI) on demographics in Bulgaria.

The crude birth rate (meaning, the number of live born children per 1000 persons of the average annual population during the year) dropped slightly.

The highest birth rates were in Sliven, Sofia and Bourgas, and the lowest in Smolyan and Vidin.

There were 1109 “multi-foetal” births – in the terminology of the NSI, meaning more than one baby born to the same woman at the same time – in 2015. The vast majority of these were births of twins. Just five cases were of triplets.

The NSI noted that the trend of babies being born to parents in Bulgaria who were not married was continuing to increase, as it had since 1991.

In rural areas, births out of wedlock added up to 66.1 per cent, while in urban areas, the figure was 56.2 per cent.

The NSI said that in 75.2 per cent of extramarital births, the names of the fathers were recorded. “i.e. most probably the children are grown up in families, by parents cohabiting without marriage”.

The highest share of births out of wedlock was in Vidin (77.4 per cent) and Vratsa (73.5 per cent). The only three districts where the share of extramarital births was less than 50 per cent were Razgrad (45.2 per cent), Blagoevgrad (42.3 per cent) and Kurdzhali (40.7 per cent).

The NSI said that the number of deaths in Bulgaria in 2015 was 1.1 per cent higher than the year before.
“The crude mortality rate remains too high,” the institute said.

The death rate among men continued to be higher than that among women, and mortality rates in rural areas remained higher than in urban areas.

The process of population ageing in Bulgaria was continuing.

The proportion of people categorised as elderly was lowest in Sofia,16.8 per cent, and in Blagoevgrad and Varna, 18 per cent.

The share of population under 15 years of age was highest in the districts of Sliven, 18.1 per cent, and Bourgas, 15.3 per cent, the NSI said.

In urban areas, the mean age of the population of Bulgaria is 42.3 years, compared to 46.1 years in rural areas.

The figures for people over working age were influenced not only by the population aging, but also by legislative changes concerning the retirement age, the NSI said.

The report said that in 2015, there were six cities in Bulgaria that had populations of more than 100 000 – Sofia, Plovdiv, Varna, Bourgas, Rousse and Stara Zagora. A total of 33.5 per cent of Bulgaria’s population lived in these six cities, according to the NSI. 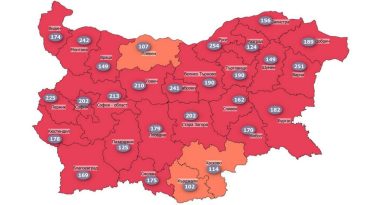