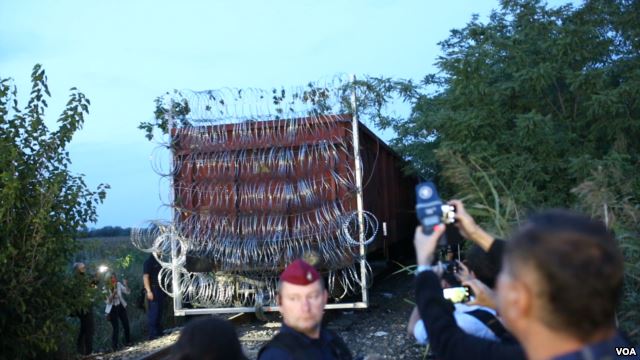 International agencies are condemning a new public campaign by Hungary they say promotes intolerance and fear, and fuels xenophobia against refugees and migrants. The U.N. refugee agency, the Council of Europe, and the Office for Democratic Institutions and Human Rights, is urging the Hungarian government to end these policies.

Countries increasingly are closing their doors to asylum seekers and migrants. The U.N. refugee agency says it is extremely worried Hungary’s newly launched anti-refugee campaign is stoking fear in the hearts of many and will encourage more governments to turn away people fleeing persecution and war.

UNHCR spokesman William Spindler said the campaign portrays those fleeing in fear of their lives as criminals, invaders and terrorists based on their religious beliefs and places of origin.

“This latest campaign, which graphically shows images that are designed to promote fear in the viewers, fear of foreigners and refugees is very worrying … and, we fear that in many parts of Europe, the political debate tends to go to populist statements, to appeals to fear and to hatred of foreigners that are not constructive,” said Spindler.

Most of the refugees arriving in Europe are from Syria, Iraq, and Afghanistan, all primarily Muslim countries. Several European countries, including Hungary, have said they prefer to accept Christian refugees over Muslims.

Spindler says the Hungarian government also is using physical means to deter refugees from entering the country. These include building barbed wire fences and detaining people for lengthy periods of time.

He said Hungary is part of the common European system and, as such, it should uphold common European values of tolerance and respect for human rights. Spindler said the country’s leaders should deal with refugees in a responsible, not punitive, way.

He said nearly 1 million people have arrived in Europe by sea this year. Spindler agreed that these numbers are putting a strain on the capacity of some countries to deal with this influx.

“But, in our view, the problem has been not so much the numbers of people arriving, but the chaotic way in which countries have responded to this situation, by unilaterally closing the borders or by not coordinating the response,” he said.

Spindler said the UNHCR is advocating a fairer distribution of refugees and asylum seekers so the impact is shared equitably throughout the European Union. He said Hungary should join in this process.

Concerns over Turkish media freedom in aftermath of failed coup