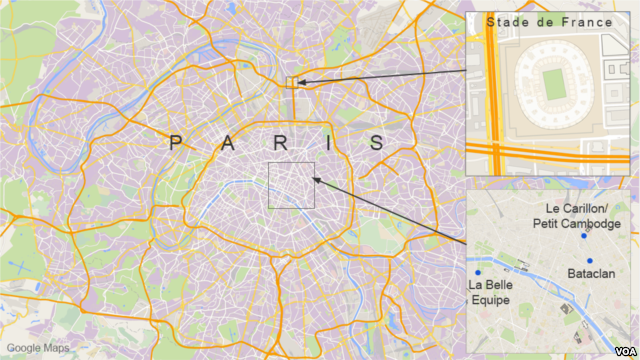 The terrorist group issued a statement Saturday, saying the attacks were in response to airstrikes against IS.

French President Francois Hollande on Saturday declared three days of national mourning following the attacks across the capital city. The French leader blamed the Islamic State group for the night of horror and called the attacks “an act of war.”

Vowing to hunt down the attackers, Hollande said, “France will triumph over this barbarity.” He called an emergency Cabinet meeting and mobilized France’s security forces at the “highest levels.”

People across France woke up Saturday to a nationwide state of emergency. Eight terrorists were killed, but it was not clear whether there might be more insurgents or accomplices lurking in Paris neighborhoods.

Hollande asked Paris residents to stay inside Saturday. Those who venture out are finding many stores closed and a ramped-up security presence, with 1,500 soldiers deployed to the French capital’s streets.

Hollande has called off his trip to Turkey for a G-20 meeting scheduled to begin Sunday.

The president ordered France’s borders closed – an unprecedented act in 21st-century Europe. However, the main airport remains open and trains are still running.

On Friday night, as many as 100 people died at the Bataclan concert hall when at least three gunmen opened fire with automatic weapons before taking scores of people hostage. Police later stormed the building, killing at least one attacker. Others may have died in suicide bombings.

At least 1,000 people were in the Bataclan audience, where a performance by an American band was interrupted by rapid gunfire. Many people escaped during the shootout.

Fatalities were also reported in other parts of Paris. One of the first explosions was just outside a sports stadium where Hollande and a large crowd were watching a football (soccer) match between the French and German national teams.

The blast was felt inside the stadium. Police evacuated Hollande from the stadium, but when play was stopped many people in the crowd ran onto the field and huddled in fear.

Several other explosions took place in that area and officials say at least one may have been a suicide bombing.

Elsewhere in the French capital, several people were killed at a Cambodian restaurant. Attacks also reported at cafes.

Authorities say about 200 people were wounded Friday, 80 of them seriously.

In Washington, President Barack Obama said the United States was ready to help in any way possible.

He called the coordinated attacks in Paris an “outrageous attempt to terrorize civilians.” Vice President Joe Biden said “such savagery can never threaten who we are.”

Secretary of State John Kerry described the attacks as “heinous, evil” and “vile.”

Defense Secretary Ash Carter said “the horrific and barbaric attacks in Paris were more than an attack on the nation or people of France – they were an assault on our common human dignity.”

U.S. officials said the embassy in France has been checking on the safety of all Americans in Paris. However, the U.S. Department of Homeland Security said in the U.S. capital that there was “no specific or credible threat to the United States.” But security has been stepped up in some major U.S. cities as a precaution.

In a letter to President Hollande, European Council President Donald Tusk said “We will ensure that the tragic, shameful act of terrorism against Paris fails in its purpose: to divide, to frighten, and to undermine liberty, equality and fraternity, the values that make France a great nation.”

Britain’s Prime Minister David Cameron said on Twitter, “We will do whatever we can do to help.” He said he was shocked by the events in Paris and his thoughts and prayers are with the French people.

At the United Nations, a spokesman said Secretary-General Ban Ki-moon “condemns the despicable terrorist attacks” and “demands the immediate release of the numerous individuals reportedly being held hostage in the Bataclan theater.”

A statement from the Vatican said Pope Francis was following the “terrible news” out of Paris.  “We are shocked by this new manifestation of maddening terrorist violence and hatred which we condemn in the most radical way together with the Pope and all those who love peace,” the Vatican statement said.

Brian Katulis, a senior fellow at the Center for American Progress, told VOA the Paris attacks “all look like they were coordinated to have maximum impact, and to send a message.”

“It demonstrates that there are a lot of vulnerabilities in open societies that can be exploited by whatever terrorist groups are carrying out these actions,” Katulis said.

Friday’s assault evoked memories of an attack by Islamist gunmen in January that killed 17 people.

Paris is due to host a major U.N.-sponsored conference beginning November 30 on the international effort to control global warming. 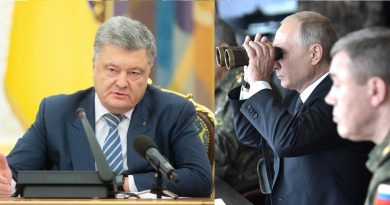 European nations divided on call for action in Syria