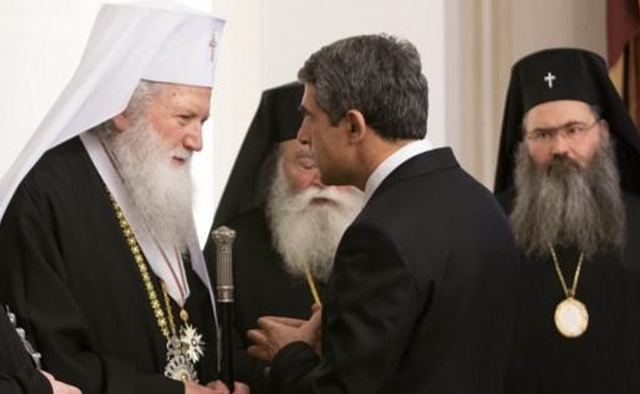 Bulgarian head of state President Rossen Plevneliev conferred the country’s highest honour, the Stara Planina first degree, on Neofit, Patriarch of the Bulgarian Orthodox Church and Sofia Metropolitan, at a ceremony on November 5 2015.

Plevneliev said that honour was a gesture of appreciation by the state for Neofit’s wise leadership of the Bulgarian Orthodox Church and the fact that the Patriarch had always stood for the unity of the church and been led by the thought of doing good for the people.

“Time and again, in times of storms and trials, our church has performed its historic mission of spiritual support and hope for the people,” Plevneliev said.

He said that the ceremony was a sign of deep respect for the personality of Patriarch Neofit, but also acknowledged the role of the Bulgarian Orthodox Church in the protection and spiritual growth of the Bulgarian people for centuries.

Neofit said that “morality, preservation of traditional values and family, our cultural heritage, peace, justice and harmony in society are a common concern of the spiritual and temporal powers”.

He said that that church and state should co-operate more actively in the social sphere, education and upbringing of young people and in the maintenance and preservation of spiritual centres and cultural monuments.

The conferring of the award on Neofit was recommended by the Cabinet at a meeting on October 13, two days ahead of his 70th birthday.