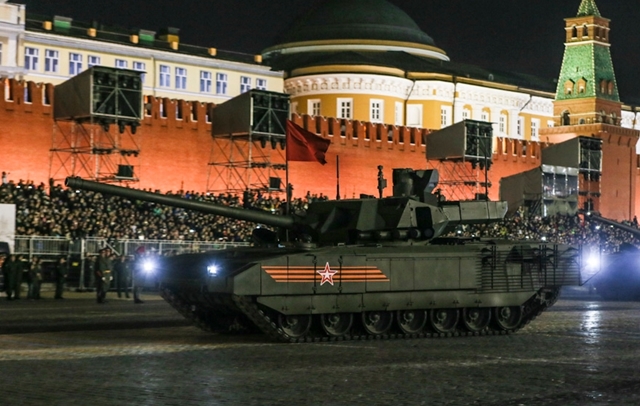 Russian President Vladimir Putin turned his May 9 Victory Day parade into a popularity contest, with the Kremlin keeping a scorecard of world leaders who acccepted and rejected invitations.

It turned out to be a contest that Putin lost in the West as one leader after another snubbed his invitiation to come to Moscow and celebrate the 70th anniversary of the defeat of Nazi Germany.

Putin has lost popularity among democratic leaders after he annexed Ukraine’s Crimean peninsula and launched an invasion of eastern Donbas with a combination of Russian forces and separatist proxies.

Maybe the separation among wartime allies is long overdue. While the West still strives for democratic values, Putin’s 15-year rule is hard to describe as anything other than a dictatorship.

Both sides have different views of the war.

The West mourns the dead and vows to to never let another Nazi Germany arise. Russia, instead, looks upon the Soviet Union’s commanding role in securing the victory in Europe as justification for its modern-day claims of superpower status.

“This is a demonstrative act in response to Putin’s attempts to show off his clout and make the West play by his rules,” Russian political analyst Dmitry Oreshkin told the Kyiv Post. “But his rules are not accepted.”

Some of the exceptions to the no-shows in Europe include the leaders of Serbia, an Orthodox Christian nation with historic ties to Russia; Greece, where a Kremlin-friendly, far-left government was elected in January, and Cyprus, an ally of Greece. They accepted Russia’s invitation.

German Foreign Minister Frank-Walter Steinmeier, seen as soft on Putin, will bypass the Moscow parade but attend ceremonies in Volgograd, scene of a decisive victory by the Red Army. Czech President Milo Zeman, who backed out of accepting the parade invitation under pressure, still plans to travel to Russia.

Surprisingly, Belarusian dictator Alexander Lukashenko, one of the staunchest Kremlin allies, refused the invitation. He has even condemned Russia’s invasion of Donbas and sought closer ties with Ukraine.

Another blow to Russia was North Korean dictator Kim Jong-un’s about-face in refusing to come after initially accepting an invitation.

The parade will be attended by the leaders of Armenia and Azerbaijan – Russia’s allies in the Caucasus – and the Kremlin’s Central Asian protégés. Other attendees include the leaders of China, India, Vietnam and several African countries.

In Russia, Victory Day has always been one of the most important holidays. Before Putin came to power in 2000, the Moscow parade was scaled down significantly and focused largely on celebrating surviving veterans.

Under Putin, who regards the collapse of the Soviet Union as the 20th century’s greatest geopolitical catastrophe, festivities were ramped up to show Russia’s military might.

Putin also uses the holiday to promote the mythology of Russia’s messianic role due to its “liberation” of Eastern Europe from Nazi rule. Therefore, in Putin’s world view, Russia claims that its neighbors, especially Ukraine, are part of the Russian sphere of influence. Putin has even gone so far as to stay that there is no difference between Ukrainians and Russians.

Oreshkin said the mythology is designed to mask the Kremlin’s economic and geopolitical setbacks.

“Putin needs symbolic victories because he has no real ones,” he said. “The war is the cornerstone of the regime’s ideological structure. Putin wants to present himself as the successor of Russian emperors and Josef Stalin.”

Last year Russia passed a law introducing criminal penalties for “lying” about the Soviet Union’s role in World War II – a move that critics say aims to stifle debate about the war. Russian authorities insist that their version of history is the ultimate truth.

The aggressive stance also extends to demonizing any groups who fought against the Soviet Union. For instance, Kremlin propagandists have branded the Ukrainian Insurgent Army, known as UPA, as “Nazi criminals” despite the fact that many of its soldiers fought against Soviet and Nazi troops.

Kremlin propagandists have also routinely used WWII imagery to describe the war in Ukraine, presenting Russia and its proxies in Donbas as the successors of the Soviet Union and Ukrainian authorities as heirs to Nazi Germany. On a program aired on Russia’s Channel One on April 8, television host Alexander Gordon proposed sending troops that will take part in the Victory Day parade to seize Kyiv.

The Kremlin’s official version of history extols Joseph Stalin and Soviet generals, downplaying the incompetence that led to the Soviet Union’s gigantic losses of territory and colossal battlefield mistakes. “Soldiers did not want to fight, and commanders were not capable of commanding,” Mark Solonin, a Russian historian who has challenged the official position in his books, told the Kyiv Post.

The Kremlin’s historians have also lashed out at critics who say that Soviet authorities were careless with the lives of their own soldiers by carrying out meaningless offensives without regard to the human cost. At least 26.6 million Soviet soldiers and civilians were killed, and many of them were Ukrainians.

“The Red Army’s casualties, including those who were killed, died of wounds and in captivity, were four-to-five times more than Germany’s casualties on the Eastern Front,” Solonin said. “At the beginning of the war, the ratio was absolutely mind-boggling – in 1941 it was 25-28 against 1.”

Yet, as the war progressed, the ability of the Soviet Red Army, partisans and civilians to drive Nazi Germany out of Russia, Ukraine and the rest of Eastern Europe is nothing short of astounding. Of course, the United States, Great Britain, France and other allies played crucial roles in securing the Victory in Europe. The allies were also fighting a war against Imperial Japan on another front.

Putin’s ideologists mostly ignore Soviet repression and war crimes, including massive rapes of German women, during the war. Stalin’s regime also used its own troops to kill retreating soldiers and carried out summary executions. Millions were exiled for political reasons in the late 1930s and 1940s, and thousands were executed.

The Kremlin has also refused to acknowledge any guilt on the part of the Soviet Union for its compact with Nazi Germany, the Molotov-Ribbentrop Pact, which divided up Eastern Europe in 1939, a move that arguably defines both totalitarian regimes as aggressors in the war.

(Photo of a night rehearsal for the parade in Moscow: mil.ru)

Ukraine: Struggle over Mariupol – and tensions over May 9 commemorations