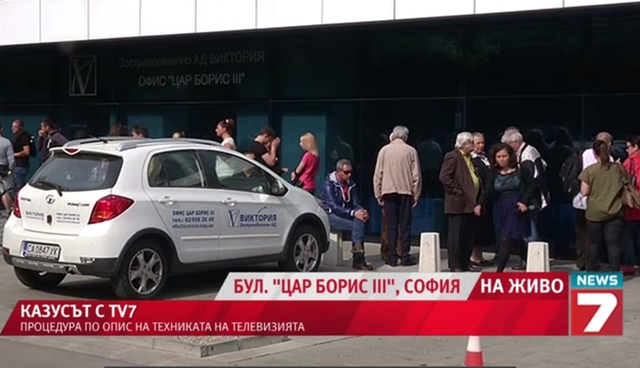 A debt collection team entered the Sofia headquarters of TV7 and News7 on May 7 in connection with the broadcaster’s debts to Corporate Commercial Bank but in contrast to the dramatic events of the previous week, there was no massive police contingent and a deal had been reached that the stations would not go off air.

Debt collector Nedelcho Mitev said that items that were collateral would be removed but only those that would not “hinder the activity” of the television stations. This was the outcome of an agreement with TV7 executive director Kiril Blagoev.

On the morning of May 7, 15 young men in tracksuits and T-shirts with the inscription ” Хамали ООД” (“Movers Ltd) accompanied by two men in suits entered the office of TV7.

This was a sequel to the giving of a one-week grace period, which expired on May 6, after the large-scale debt collection attempt on April 29. Conduct of police on that day led to the dismissal of two senior Sofia police officers.

Earlier this week, the television station sent an open letter to Prime Minister Boiko Borissov and Interior Minister Roumyana Buchvarova asking for intervention in the case.

Speaking to Nova Televizia on May 7, Deposit Guarantee Fund head Radoslav Milenkov said that the sum owed by TV7 to Corporate Commercial Bank was less than five million leva.

He said that the week-long grace period given to the station had been an exception and the legal procedure had been resumed.

“I can assure you that every bank applies such a procedure in relation to debtors who do not keep up payments,” he said.

Regarding debts to CCB, Milenkov said that the bank’s liquidators have focused on companies that “have some financial security.”

According to a transcript of a cabinet meeting on May 7, TV7’s debts to Corporate Commercial Bank were about 300 million leva, directly or indirectly.

Asked for an update regarding CCB by Prime Minister Boiko Borissov, Finance Minister Vladislav Goranov said that while TV7’s direct debt to CCB was just a few million, through the Technological Centre – Institute for Microelectronics the sum came to more than 288 million leva. The latter had lent about 260 million leva to TV7 owner Crown Media, which Goranov described as a Cyprus offshore company.

Goranov briefed the cabinet on the pattern of indirect financing by CCB and said that at the moment, 99 per cent of loans from the bank were non-performing. He highlighted the bank’s practice of issuing unsecured loans.