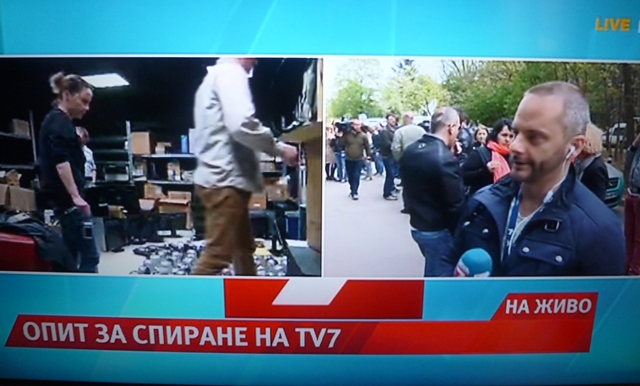 Bulgaria’s TV7 and News 7 channels were raided on April 29 by debt collectors and removal firm staff accompanied by a large contingent of police, seizing technical equipment that put the television stations at risk of shutdown.

The drama was broadcast live on the channels. Some hours after events began to unfold, some of the staff of the television channels linked arms and tried to prevent debt collectors entering the building. 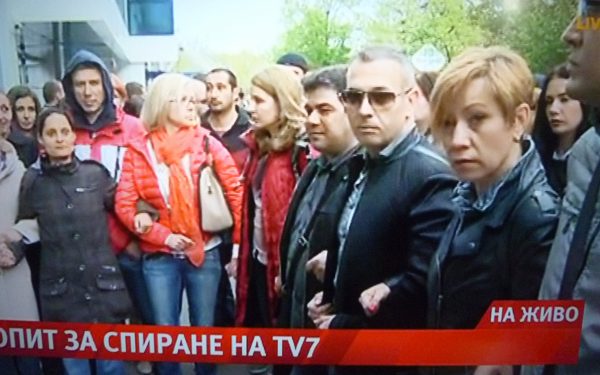 Most staff themselves were barred from entering the building by police, who admitted only the private bailiffs and removal firm team.

The bailiffs had an inventory of equipment to be seized and reportedly had a court order to stop the broadcast of the channels. 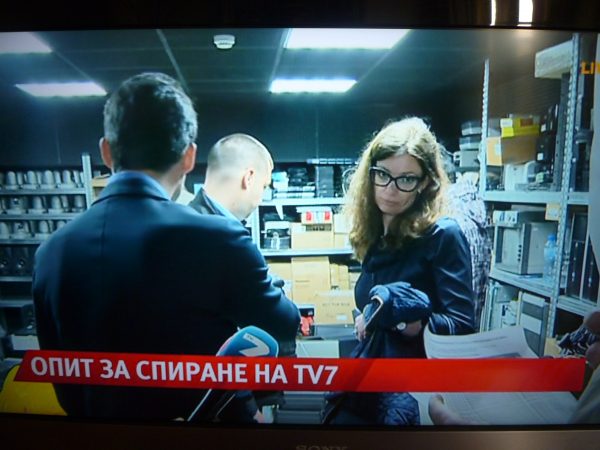 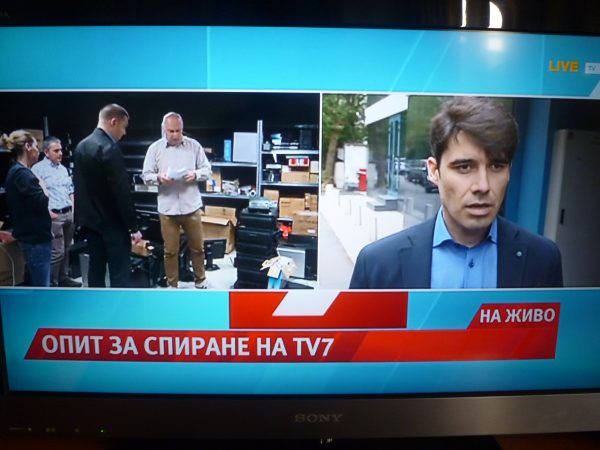 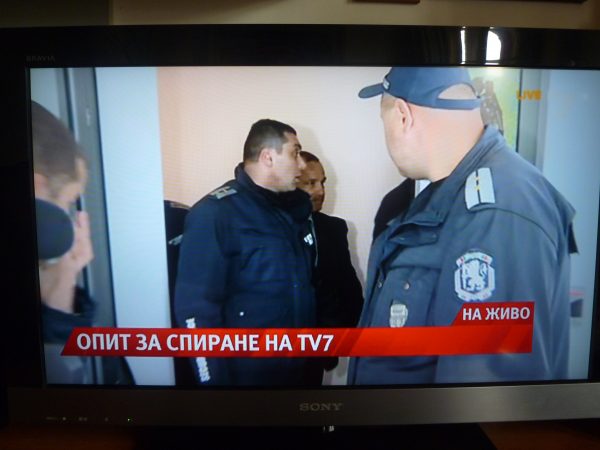 The press office of the Interior Ministry was reported as saying that the police were at the building at the request of the private bailiffs.

Executive director of TV7 Kiril Blagoev said that the confiscation was being carried out at the request of the liquidators of Corporate Commercial Bank (CCB).

In its live reporting, TV7 said that Kristina Dimitrova, who had introduced herself on arrival at the building that morning as a private bailiff, was not registered as such in Sofia, the station said, quoting the Chamber of Private Enforcement Agents. Subsequently, the station said that Dimitrova was legal counsel for Corporate Commercial Bank.

Bulgarian National Television (BNT) reported that CCB bankruptcy receivers had lodged a request with Sofia City Court, asking for a warrant to seize the equipment.

The court ruling said that because TV7 was a media with national coverage, it could not authorise the repossession of equipment, but the ruling was being appealed against, BNT said.

Mass-circulation daily 24 Chasa reported, quoting unnamed sources familiar with the situation, that the station’s equipment had been used as collateral to secure a loan from CCB.

In a statement on the afternoon of April 29, the Chamber of Private Enforcement Agents said that the action against TV7 was being taken because the station had not complied with a request to hand over television equipment that had been collateral for a loan taken from Corporate Commercial Bank.

The chamber said that because the debt had not been serviced, the station had been asked to hand over the equipment within 14 days. This had not happened, and so the liquidators of Corporate Commercial Bank had proceeded to confiscation of the equipment.

In the course of the day, the police presence at the building was reinforced as crowds of journalists and supporters of the station built up outside. 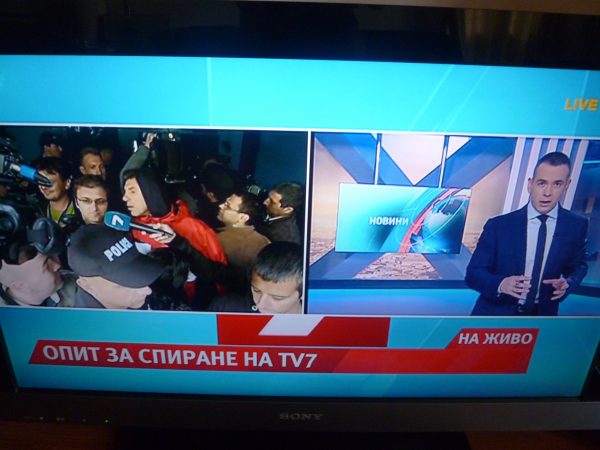 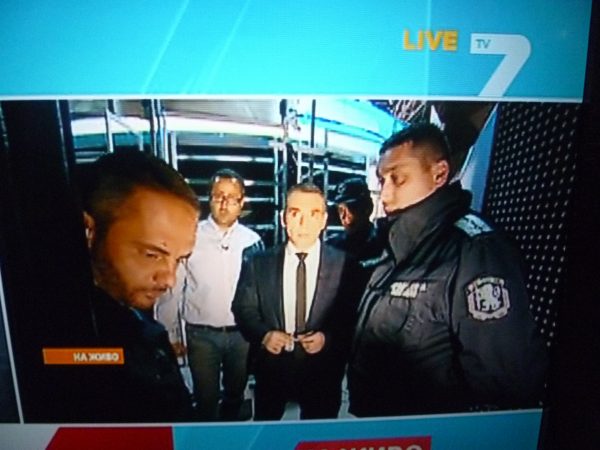 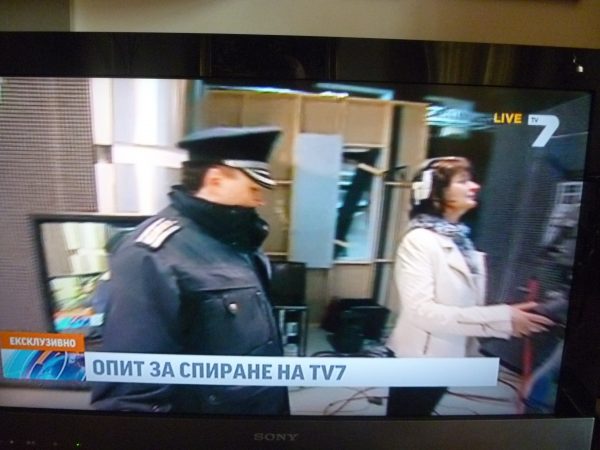 In 2013 and 2014, TV7 was the subject of sharp criticism from protesters against Bulgaria’s ruling axis of the time. The protesters alleged that the station was part of a media network biased against them and close to the now-departed administration. In particular, the station was seen by protesters as consistently underestimating participation in the protests.

During its live broadcast about itself on April 29, TV7 said that it was calling a freedom-of-speech protest outside its building in the evening. (Update: Turnout for the protest was rather small and appeared to consist largely of the station’s employees, judging by the images broadcast live by TV7.)

Soon after 4pm, Deputy Prime Minister and Interior Minister Roumyana Buchvarova arrived at the scene, saying that she wanted to acquaint herself with the situation. 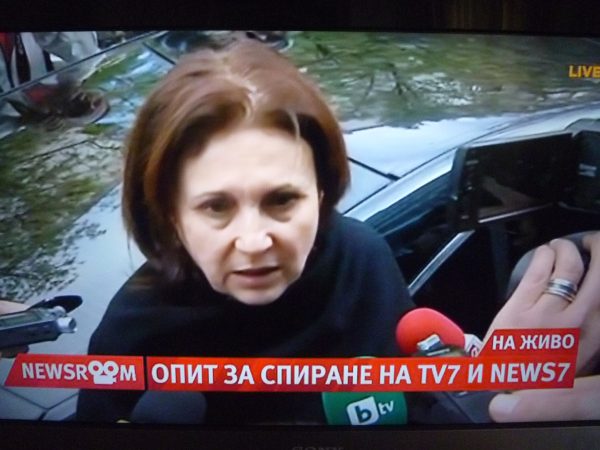 Live on air, the television had messages of support from the leader of the nationalist coalition Patriotic Front, as well as MPs for the opposition Bulgarian Socialist Party and minority socialist breakaway party ABC.

Prime Minister Boiko Borissov said in the afternoon that he had told Interior Minister Buchvarova that the Interior Ministry staff – meaning the police – should immediately leave the offices and studios of TV7 and News7.

Announcing this in a post on Facebook, Borissov said that the private bailiff should explain his actions, “which are the result of a judgment about which, as far as I am aware, the management of the television station has been informed”.

He said that he expected Radoslav Milenkov, the head of the Deposit Guarantee Fund, to give more information about the procedure for foreclosure that was initiated last year regarding the television station so that its activities were managed by a trustee, while the National Revenue Agency had attached assets because of debt, according to Borissov.

Borissov said that he had always upheld the right of journalists to exercise their profession and the constitutional right of citizens to be informed. “Only the law will give us freedom, let’s all stick to it,” he said.

Subsequently, Borissov appeared in a brief phone interview on the station, also using the moment to make a sharp comment about the “Kostinbrod affair” and TV7’s involvement in publicising it. 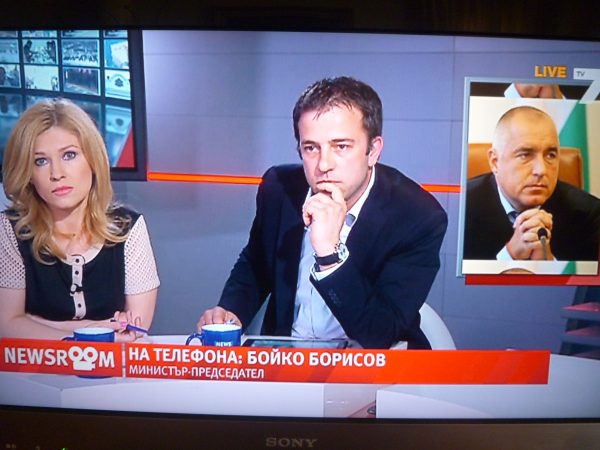 The raid led to a media and political storm the day before the national parliamentary elections, with the focus on the printing house owner’s ties to Boiko Borissov’s GERB party, while GERB’s political opponents alleged that the extra ballots were meant to be used in an attempt to defraud the elections.

Sofia City Court ruled on April 15 to find Rossen Zhelyazkov, the former Council of Ministers chief secretary, not guilty on charges of criminal misconduct in connection with the ballot papers.

Speaking to TV7, Borissov also referred to Nikolai Barekov, then an employee of the station, who had made much of the supposed “Kostinbrod affair” with a live broadcast on the day ahead of the election. The suggestion of impropriety at the time is seen as having damaged the vote for Borissov’s GERB party in 2013.

Barekov went on to a lacklustre performance as a populist politician, positioning himself in opposition to Borissov. Studio presenters were irked by the reference to Barekov, himself reported to have attempted action against the station for alleged debts.

One of those who called into the station to express support was Angel Dzhambazki, one of two MEPs elected to the European Parliament in May 2014 on the ticket of Barekov’s “Bulgaria Without Censorship” coalition. Dzhambazki, of a nationalist party, quit his association with Barekov in one of the first episodes of the process during which BWC’s alliances began to disintegrate.

Dzhambazki expressed indignation about the events of April 29 at TV7, saying it was “third world”. “Is this Zimbabwe, Congo, Mali, Chad?” he said.

National Deposit Guarantee Fund head Milenkov told a news conference on the afternoon of April 29 that TV7 had a debt to CCB of millions of euro.

This debt had not been serviced and for 10 months, negotiations about payment had been conducted, unsuccessfully, he said.

The private bailiff had given a deadline for voluntary payment, which had expired on April 28, Milenkov said.

This was why today an attempt had been made at enforcement of the debt, he said. “By these actions, the receivers are only protecting the rights of depositors,” Milenkov said.

He said that TV7 was not the only debtor to CCB against which action was being taken, but he did not disclose the names of the others.

(For full coverage of the CCB situation from The Sofia Globe, please click here.) 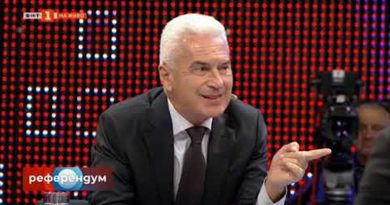