Grigor Dimitrov made short work of Germany’s Dustin Brown in their first-round match at the Australian Open in Melbourne on January 19, winning 6-2, 6-3, 6-2 in just 69 minutes.

Despite the upset potential of what was seen as a tricky draw for the Bulgarian – Brown notched two wins against top-10 opposition in 2014, defeating Rafael Nadal and John Isner – Dimitrov dominated against an opponent that had twice as many unforced errors (26, including seven double faults) as winners (13).

For his part, Dimitrov made 30 winners (including 11 aces) with only six unforced errors, converting five of his 11 break points without allowing Brown a single opportunity to break serve. Dimitrov served well, dropping only four points when his first serve was in play (37-of-41) and five points on second serve (15-of-20).

He will next play Slovakia’s Lukas Lacko, who prevailed in a five-set slugfest against Maximo Gonzales of Argentina – 4-6, 6-2, 7-5, 6-7 (4-7), 6-1 – that went on for nearly three and a half hours. Dimitrov, who is seeded 10th in Melbourne, has never played Lacko, ranked 99th in the world, in an ATP Tour match, but the Bulgarian won their one encounter at a Challenger tournament in Orleans in 2010.

Bulgaria’s top female player Tsvetana Pironkova will play her opening match in Melbourne against Britain’s Heather Watson, fresh from her second career title win in Hobart, on January 20. If she prevails, the Bulgarian could face 11th-seed Dominika Cibulkova of Slovakia in the second round.

Pironkova has never progressed beyond the second round in Melbourne, reaching that stage of the Australian Open on six previous occasions, including last year, when she lost in straight sets to Samantha Stosur. 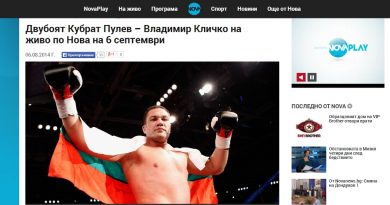