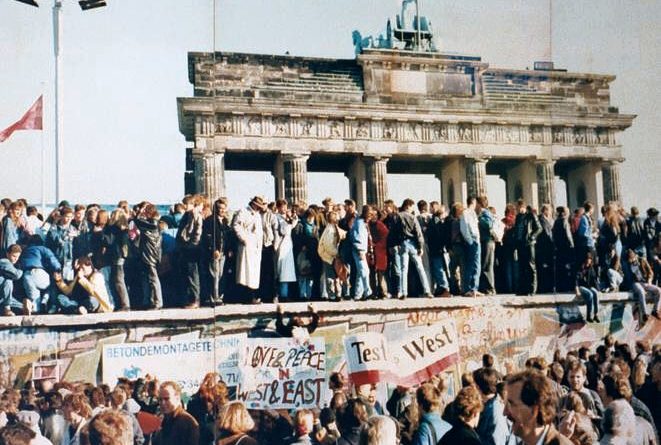 Ceremonial events are under way in Germany marking the 25th anniversary of the fall of the Berlin Wall.

German Chancellor Angela Merkel led several events Sunday, including the placing of a rose in one of the few remaining sections of the Wall to commemorate those who died trying to escape to the West.

The day’s ceremonies in the German capital began with a trumpet call, evoking the trumpets the Bible says brought down the walls of Jericho.

Current and former world leaders are marking the occasion with warnings of continued divisions among major powers.

U.S. President Barack Obama issued a statement saying Russia’s actions against Ukraine are a reminder that there is “more work to do” for Europe to be “whole, free and at peace.”

The Berlin Wall divided the German capital and came to define the Cold War, which pitted the United States and its allies against the Soviet Union following World War Two.

Former Soviet leader Mikhail Gorbachev said Saturday that the world is on the brink of “a new Cold War,” and that some say it has already begun.

At an event commemorating the Berlin Wall anniversary, Mr. Gorbachev said “bloodshed in Europe and the Middle East against the backdrop of a breakdown in dialogue between major powers is of enormous concern.”

The West and Russia have been mired in tensions over Ukraine for months.

Built in 1961, the Berlin Wall divided the city for nearly three decades.  It separated Soviet East Germany from West Germany, which was occupied by the Americans, French and British.

The 161-kilometer wall was designed to keep residents in the East from fleeing to the West.  It divided streets and neighborhoods and tore apart families and friendships.

Nearly 140 people are said to have died trying to cross the wall from communist East Berlin, but victims’ groups say the number is closer to 700.

Opening of the border

It was November 9, 1989 when East Germany’s government ended its restrictions on travel into West Berlin after weeks of public protests that began in the eastern city of Leipzig and spread to East Berlin.  Jubilant crowds immediately gathered at the wall, climbing it and crossing through the gates, hammering and chiseling away pieces of it and joining in celebration with West Berliners on the other side.  Not one shot was fired.  The opening of the border was a critical moment in the collapse of communism.

Just two years earlier, then-U.S. President Ronald Reagan had delivered a speech in Berlin in which he challenged Mr. Gorbachev to “tear down this wall.”

German authorities say the emphasis of the anniversary this year is on celebrating a unified Germany.

A 15-kilometer chain of illuminated balloons along the former border will be released into the air as a symbol of the wall’s elimination.

Chancellor Merkel, who was a scientist in East Germany at the time the wall fell, has said it is a day she will never forget.