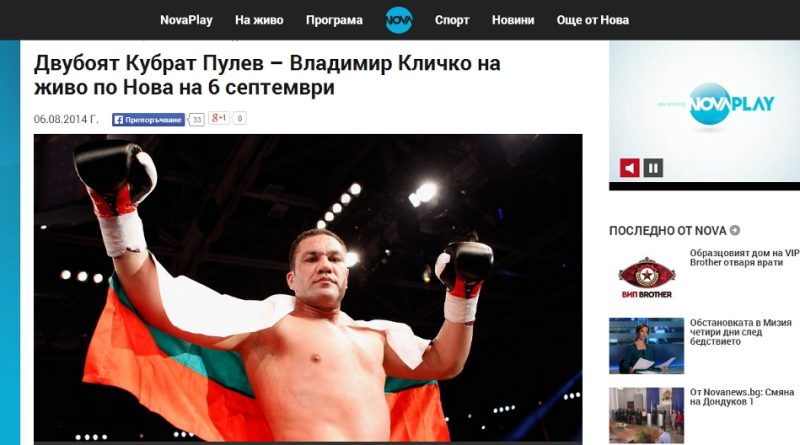 Bulgaria’s Nova Broadcasting Group said on August 6 that it has secured the rights to show the IBF boxing title fight between Ukrainian heavyweight champion Wladimir Klitschko and his Bulgarian challenger, Koubrat Pulev, on September 6.

The broadcaster also announced that it has extended its contract with Sauerland Event, Pulev’s promoter, until 2017. The deal will give Nova the rights to broadcast 10 boxing galas a year, organised by Sauerland, in Bulgaria – boxing is one of the mainstays of the group’s sports channels Nova Sport and Diema, alongside athletics and football (including the English Premier League).

Pulev will fight Klitschko in Hamburg’s O2 World arena, with Klitschko’s K2 Promotions winning the purse bid to gain promotional control of the fight in June.

Pulev, nicknamed “the Cobra”, has made no secret of his desire to fight Klitschko and has repeatedly suggested, over the past year, that the Ukrainian was “afraid” to fight him. After Klitschko defended his WBO world title against Australian challenger Alex Leapai in April, the IBF said that he would be stripped of his title if he did not fight Pulev next.

Bulgaria’s Dimitrov on collision course with Djokovic at Indian Wells