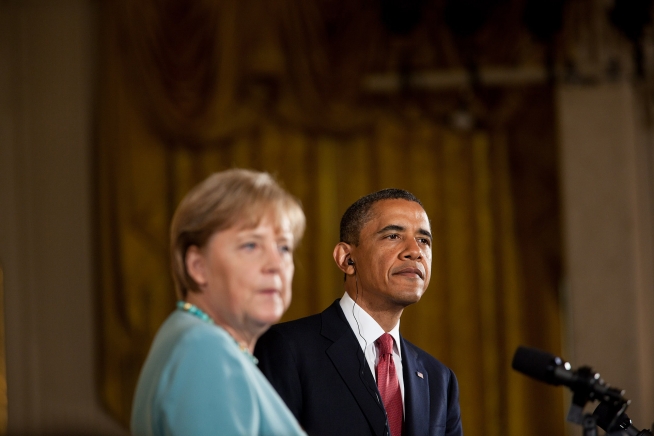 The White House said on Thursday it was essential that the United States and Germany continue to cooperate after Germany took the unusual step of expelling the top U.S. intelligence official in Berlin, a highly unusual rebuke to one of its closest allies in the midst of allegations that Washington hired German operatives to sell it secret documents.

German government spokesman Steffen Seibert said the unnamed spy “has been told to leave Germany” adding that it was crucial for Germany “to work closely on a basis of trust with Western partners, in particular with the USA.”

“We have seen these reports and have no comment on a purported intelligence matter,” White House spokeswoman Caitlin Hayden said. “However, our security and intelligence relationship with Germany is a very important one and it keeps Germans and Americans safe.” She added that “It is essential that cooperation continue in all areas and we will continue to be in touch with the German government in appropriate channels.”

In Washington, the White House said it had no comment on the expulsion of the intelligence official.

But spokeswoman Caitlin Hayden said “our security and intelligence relationship with Germany is a very important one and it keeps Germans and Americans safe.” She added that the United States would be in contact with the German government “in appropriate channels.”

Germany is investigating the activities of two Germans who have allegedly spied for the United States, activities U.S. officials have declined to publicly discuss.

German Chancellor Angela Merkel, angered months ago with the revelation that the clandestine U.S. National Security Agency had eavesdropped on her cell phone, said that if the current reports of U.S. spying on her government prove to be true, it is “a waste of energy.”

“If what is currently discussed corresponds to the facts, and a lot is still being investigated by the federal prosecutor-general, then I simply want to say that looking at it with common sense, in my view, spying on allies is a waste of energy in the end. We have so many problems, and I think we should concentrate on the essentials,” Merkel said.

The Germans are investigating an intelligence worker, 31, suspected of selling more than 200 documents to the U.S. Central Intelligence Agency for $34,000. He was first pinpointed by German security officials as he sought to sell documents to Russia, but then told investigators he was a double agent for the United States.

In the second case, a German military employee is suspected of passing secrets to the United States. German media reported investigators searched his Berlin-area home Wednesday.

Erdogan continues effort to hold on to power in Turkey