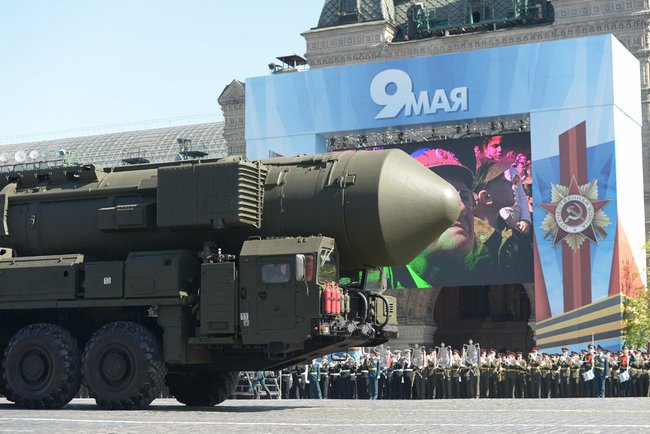 The atmosphere in a number of Central and Eastern European countries – especially Ukraine – was anything but celebratory as May 9 saw illustrations of the old and new divisions of Europe in the marking of Europe Day and Victory Day.

The European Union’s Europe Day commemorates the 1950 declaration by France’s then-foreign minister, Robert Schuman, of the aspiration to create a supranational community of states. For Russia and those allied to the current Moscow regime, May 9 means Victory Day, commemoration of the defeat of Nazi Germany.

In Ukraine, the target of aggression from that current Moscow regime, prime minister Arseniy Yatseniuk issued an appeal on the eve of May 9 to his compatriots to avoid holding large-scale events on the day and to resist being provoked into violence if attending such events.

Yatseniuk said that he suspected that Russian president Vladimir Putin was planning some form of skirmish to discredit Kyiv on the day, RFE/RL reported.

Earlier, the Ukrainian government announced that it had cut back events on May 9.

On the morning of May 9, a combined patrol of the road police and Maidan Self-Defence units in Kyiv detained a man in a bullet-proof vest driving a Skoda car that had an automatic rifle and ammunition in the boot, a spokeswoman for the police told the Kyiv Post. The driver was caught close to the Glory Square, one of the main sites of Victory Day celebrations in Kyiv.

Putin’s reported plans to attend the May 9 World War 2 victory parade in Sevastopol – home to Russia’s Black Sea fleet – were still not confirmed on the eve of the event, euronews said.

German chancellor Angela Merkel has said it would be a “pity” if such an event were held in Crimea, whose annexation by Moscow is considered illegal in the West.

Russia held an expanded Victory Day parade in Moscow, amid a surge of patriotism over Crimea’s annexation, VOA reported.

The military parade more hardware than usual and the display went on for longer.

Putin did not mention Ukraine in his speech, telling the crowd that the “iron will of the Soviet people” had saved Europe from slavery, the BBC said.

Putin watched from the stands as 11 000 Russian troops took part in Friday’s parade.

Elsewhere in the region, Riga city council executive director Juris Radzevics, acting on security police recommendations, earlier banned the association “Rodina” (Motherland – Russian) from organisng the so-called “Russian march” on May 9, the Baltic Times reported . Police had said that the event could be a substantial threat to public order, which could in turn lead to possible unrest.

Czech president Miloš Zeman’s office announced earlier that he had declined to attend a May 9 reception at the Russian embassy in Prague.

Authorities in the break-away Moldovan region of Transnistria are set to follow Russia’s example in banning criticism of the role played by the Soviet army in World War 2 .

The president of the separatist republic, Yevgeny Shevchuk, promulgated a law on May 8 that bans actions or statements “distorting authentic facts regarding the Great Patriotic War or diminishing the merits of the participants in the Great Patriotic War, as well as those who died in the fight against fascism”. The law is set to go into effect later this month and envisions penalties ranging from a $300 fine to five years imprisonment.

Transnistria – which declared independence in 1992 following a brief armed conflict with Moldova that resulted in a ceasefire following the intervention of Russian troops on the separatist republic’s side – widely uses Soviet-era symbols and has been occasionally described as the last surviving fragment of the Soviet Union. The self-proclaimed republic remains unrecognised, even by Russia, which has effective control of the region because of its troops stationed there and the hundreds of millions in card currency Moscow has spent subsidising the local authorities.

Domestic celebrations on May 9 in Moldova were expected to add to societal tensions, Deutsche Welle reported earlier this week.

On May 9, parts of Moldova were to celebrate the EU’s annual Europe Day; other Moldovan citizens would instead be celebrating Victory Day. The latter, made up primarily of pro-Russian oppositional communists and socialists, said that the would parade through Grand National Assembly Square on May 9 to celebrate the victory over Nazi Germany in World War 2. Typically, the pro-European parties celebrate Europe Day on the same square.

EU member state Bulgaria was holding a number of official celebrations of Europe Day, while some were celebrating Victory Day.

Georgi Purvanov, the former Bulgarian Socialist Party leader who was head of state from 2002 to 2012 and now has his ABC movement as an entrant in Bulgaria’s May 25 European Parliament elections, was scheduled to lay flowers on the morning of May 9 at the Monument to the Unknown Soldier and at the Monument to the Soviet Army in Sofia, his party’s press office said.

According to a report by television station bTV, a group of volunteers assisted by a private security firm had arranged to guard the Soviet Army Monument. The monument has been a regular target for redecoration in protest against the current government and against Russian aggression against Ukraine.

Sergei Stanishev, leader of the BSP and of the Party of European Socialists, also was at the Soviet Army monument in Sofia, accompanied by all the members of Parliament from the BSP.

Laying flowers at the Soviet monument, Stanishev said, “Their memory lives on for all of us, because those who do not remember their history, have no future, and so today, May 9, the entire parliamentary group of the Left is here in front of this monument to honour all who died and all who fought against Nazism.

In the view of Stanishev, “Today is a double celebration – Victory Day and Europe Day, the two are very closely related”.

This was, according to Stanishev, because without the victory over Nazi Germany, today Europe would not be the same, and the biggest lesson of World War 2 was that the people of Europe need to live in peace and have political dialogue and co-operation.

Stanishev said that for him, the day was “deeply personal” because his grandfather fought in the war, his father was a Bulgarian anti-fascist and “it’s in my blood and that thought is in my heart”.

He said that in these difficult weeks “we can see an unnatural situation – two brotherly nations – Russia and Ukraine – are experiencing a serious crisis.

“This is not a natural state , and I want to state clearly the BSP will be the political force that will defend dialogue and a political solution to overcome this crisis. We are against violence,” Stanishev said.

Bulgaria’s Reformist Bloc, an alliance of centre-right and right-wing parties, threw a special light on the day, as per this photo posted on its Facebook page: 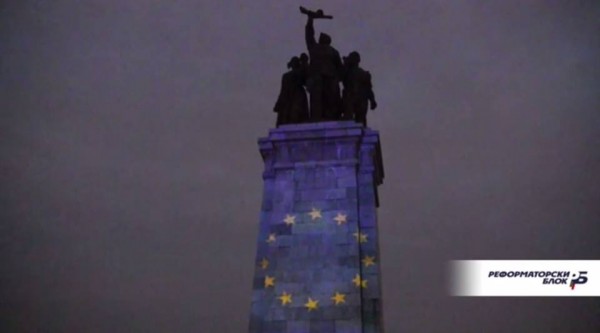 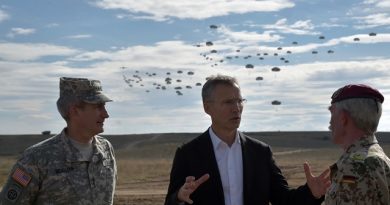