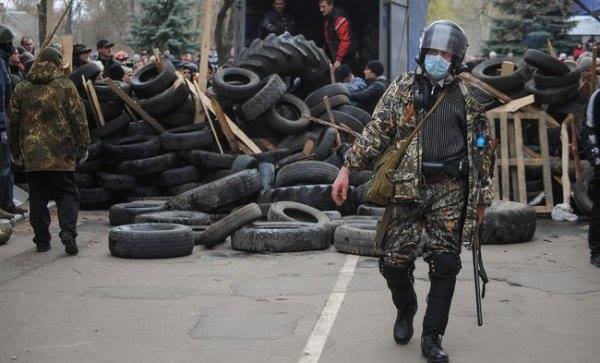 Ukrainian government forces fought gun battles Monday with pro-Russian milititants in the separatist-controlled eastern Ukrainian city of Slovyansk, a day after pro-Russian protesters stormed the police station in the southern city of Odessa, the Voice of America reports.

Six people have been killed and around 100 wounded, said a Ukraine Security Service spokeswoman. Russia’s Interfax news agency quoted a separatist source in Slovyansk as saying that 20 or more pro-Russian militants had been killed in the fighting.Also, a Ukrainian military helicopter was shot down near Slovyansk on Monday, but the pilots survived, Ukraine’s defence ministry said.Separately, Kyiv drafted police special forces to the southwestern port city of Odessa to halt a feared westward spread of the separatist rebellion.

Ukrainian Interior Minister Arsen Avakov said on May 5 that the Ukrainian government will send a special police force to the port city of Odessa to help restore order after separatist violence on May 2 left 46 people dead, the Kyiv Post said.

Avakov accused the Odessa police of failing to prevent the violence, saying that they acted “outrageously, possibly in a criminal fashion”.

“The Ukraine government is in a “difficult dilemma”, said Steven Pifer, a former US ambassador to Ukraine, in an interview with Deutsche Welle. Pifer is now working for the Washington-based think tank Brookings Institution. “The use of force could provoke a military intervention by Russia,” said Pifer. But if the government does nothing, it could lose eastern Ukraine.

The military operation in Slovyansk is a direct consequence of the public’s biting criticism of the government’s previous position, thinks Volodymyr Fesenko, a political expert in Kyiv. “They have been forced to show determination,” he said in an interview with DW.

Russia has called on Ukraine’s government to stop an operation against pro-Moscow separatists in the east and enter talks aimed at resolving the crisis, Radio Free Europe/Radio Liberty said on May 5.

Russia’s Foreign Ministry said in a statement that a humanitarian crisis was looming in cities where Ukrainian forces have been trying to dislodge pro-Russian separatists.

It called on the Kyiv authorities “to come to their senses, stop the bloodshed, withdraw forces, and finally sit down at the negotiating table to begin a normal dialogue about ways to resolve the political crisis.”